Posted on September 23, 2015 by lynnefrancophile

Split has a castle (diocletian’s palace) rather than an old town and it is full of souvenir shops, bars and restaurants. Our lovely hosts had made sure we were furnished with maps which ivana annotated to indicate the best places to eat. Ivica told us she is his wonderful business manager and they seem to have a lovely father/daughter relationship. Ivana told us she is studying law and russian as she believes these will be increasingly useful skills in croatia. Another energetic young person!

We had gone out earlier to find breakfast ingredients and discovered a nearby supermarket. It was quite novel to sit at ‘our’ table and enjoy a light brekkie for a change. 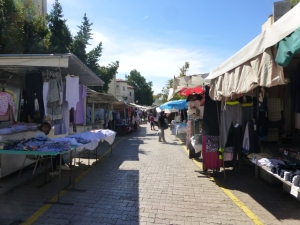 Afterwards, we walked down to the castle wall on the east side which is lined with market stalls. Lou tried to frogmarch me past but did have a little look of his own! Once inside the castle the crush of tourists really began.

Guides led their groups, one holding up a large paper flower. I visited the cathedral and the bapistry while lou people watched. We wandered the alleys looking for the recommended restaurant. 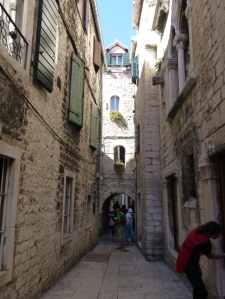 It was in a quiet square so we sat down for a pause and coffee. A girl working there offered to take our photo when she saw lou taking one….of me!!! Lou gave in gracefully and even smiled. She then chatted away about croatia and good places to eat elsewhere in the town. We had already booked for the evening and she suggested certain tables and to be sure to get the waiter who explained the menu as he was so amusing!

Coffee finished we followed the walking trail around the castle including making a wish while touching the big toe of the enormous statue (grgur ninski) by the northern golden gate! Then we went to find the fish market and check out nostromo’s menu for lunch. Good choices but we fancied something light. The fish market opposite had nearly finished for the day so no photo opportunities. More meandering brought us out on the riva, the quay,  with even more cafes and restaurants. 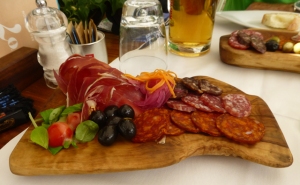 We read menus and opted for one that offered a platter of dalmatian charcuterie. It was very good, especially the venison saucisse. Afterwards, our mission was to return to ‘mihaela apartments’ and take photos. Lou’s idea and a good one. 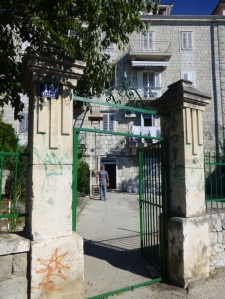 The front had a ladder up against it and building work was going on. The trouble is, said lou, it all looks so much better in the photos full of sunshine! But still no name and nothing on the other side of the building either. Later i had an email from booking.com saying that i had been named as a noshow which means forfeiting the whole amount of the booking, 220 euros! 😦 hey ho, win some, lose some!

Carrying my cards, magnet, impulse-buy top etc up the hill to apartment maric in 36 degrees was challenging and a zzz with the aircon on was lovely.

Much later, we headed back down the hill for our date with the fish restaurant. It didn’t disappoint. Lou reckons the sauce on his john dory was the best he’d ever had. My monkfish was pretty good too. The whole evening was lovely and i told myself (and lou) we must never forget how lucky we are to be able to do this sort of thing. ‘Yes, dear’ came the long suffering reply. Strolling down to the centre we found buskers entertaining people sitting around the square in front of the cathedral. 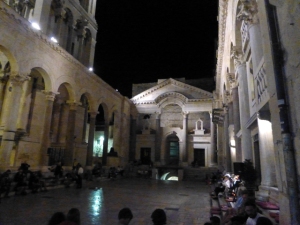 What a shame the chauffeur doesn’t dance. Mind you, nobody else was either. Some people just ain’t got no romance in their soul!