Posted on September 22, 2015 by lynnefrancophile

Another long drive on sunday with three borders to cross but first breakfast at floga. We were asked not to come down until 8.30. When we walked into the bar i could see why. It was full of men drinking coffee and raki. The car park was full of cars, vans and mopeds. Drinking and driving? The lady owner brought a paper cloth for our table and breakfast arrived. 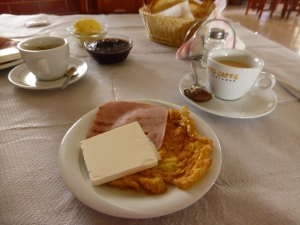 Bread, butter and jam and on a plate each an omelette, a slice of ham and a large slice of very salty feta. The feta disappeared into my bag to be disposed of later. Sad but what to do? Neither of us could face cheese at that time of day. At berat it arrived but on a side plate so it could be reused!

As we left i went into a tiny shop to get a packet of tissues. I only had a 1000 lek note for the price of 80. I tipped out my small change, which wasn’t enough. The chap looked at it, scooped it off the counter and gave me the tissues with a big smile. A lovely gesture to start the day. 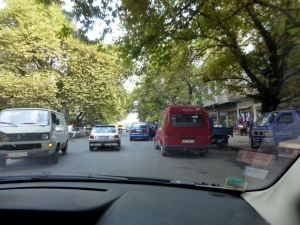 Shkoder was busy and lou negotiated the bicycles, pedestrians, carts, cars appearing suddenly….. out of shkoder and the relative calm of the road to hotti i hani, the border town. 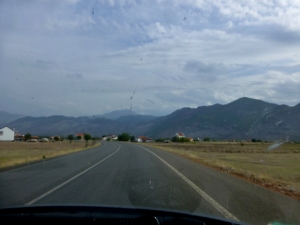 We had looked at various routes to split and plumped for the road south to the coast from podrica to avoid the twisting albiet beautiful one through the mountains. We drove through darkening skies until a tremendous rain storm hit us. 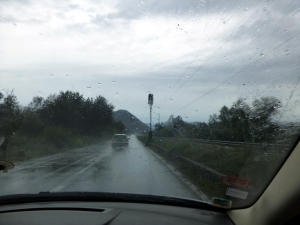 Lou had been saying he needed a good shower to clean the windscreen properly. He got it!

The montenegran coast is pretty but too overdeveloped and the road out to tivat and its airport quite ugly although quick. By lunchtime we were back at the car ferry across the boka. 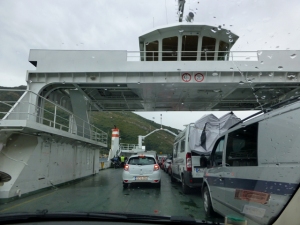 Once over we stopped to eat in yet another pizzeria but managed to find chicken salad for me and toasted sarnies for lou. Enormous portions, comme d’hab!

Onward over the border and then the stunning ride up the dalmatian coast, so far unspoiled. 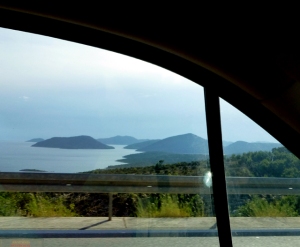 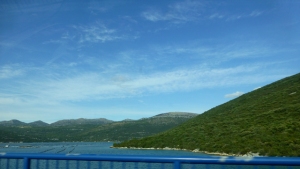 Each vista produced a ‘oh, lovely’ from me and a resigned ‘yes, dear’ from lou. Afternoon tea and coffee stop in bosnia herzogovena and then the relief of the motorway after ploce.

We thought we had split sussed, the gps knew the street for a change. But no! A narrow lane that i walked down to find a spot for lou to park and then a hunt around the alleys for number 12. Number 12 turned out to be a scruffy building with a dirty entrance hall. Meanwhile i was constantly calling the number i had been given and getting no reply. After a frustrating wait and getting more and more apprehensive about the area, i told lou, sod this, let’s find somewhere else. We drove around a bit only seeing umpteen ‘apartmen’ blue signs until my hero spotted a lit up one. 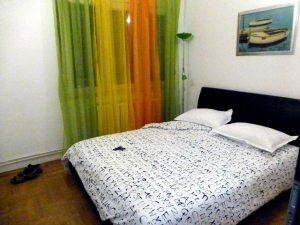 I sprinted back down the hill and long story short we found a bed for two nights. God bless ivica and his family!

2 Responses to splitting in split