butrint and the border

Posted on September 19, 2015 by lynnefrancophile

Well, the author of my guide book may dislike serande but as seaside towns go it is certainly not the ugliest i’ve visited. 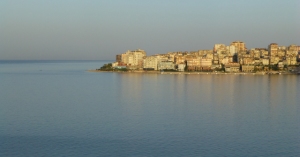 Watching the sun light up the buildings across the bay was lovely yesterday morning and seeing a fisherman row his boat slowly along then stopping to haul in his nets. All very pictur – es – queu! Close to the water’s edge there are bars and restaurants and little beaches with parasols.

The first night we were recommended to a nearby fish restaurant where we ate an albanian speciality called saganova, seemed an apt dish for we oldies! 🙂
The purpose of coming here was to visit butrint, a unesco protected archeological site further south. Having abandonned the tempting but logistically challenging notion of taking a boat to corfu we ate a late breakfast on the huge terrace busily attended to by eric and his oppo.

While there we noticed a couple of coaches pull up next door and disgorge their ocupents who took over the neighbouring terrace. Late breakfast or early coffee break? As we went to find a bank machine two more arrived and the tourists swarmed into our place. By the time we got back all four coaches had left. Bet they are off to butrint i suggested. And they were.

Arriving there after a short and straightforward drive (amazing) we found the four of them parked up. So our walk around the designated route was punctuated by our negotiating groups being lectured in german or english or ? 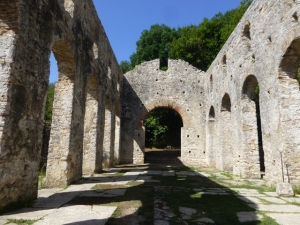 We were faster so by halfway we had skipped ahead so could enjoy scrambling up and down the ruins almost on our own. The site is bounded by a lake and a sea channel. 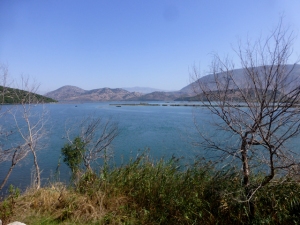 Happily it was very wooded and we walked in the shade a lot of the time. The heat has taken us by surprise and the family at the berat hotel told us it was unusually hot for the time of year. 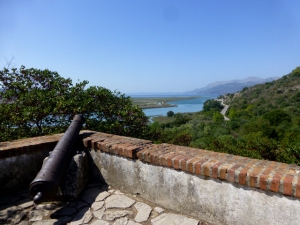 Having paid appropriate attention to all the information boards and seen almost every part of the remains lou settled for an icecream while i plundered the handicrafts stall. Then it was into the nearby hotel for lunch on its shady terrace. We watched as the coaches thundered off. One englishman trying to take the same people free photo as us had said they were on a day trip from corfu. I had read that the bulk of tourists in sarande come to the town that way.

We continued to sit in the shade and enjoy our situation a deux.

Next to the car park there was a chain ferry that looked as if it had been thrown together by school kids using old floorbòards but no tools, nails or screws. 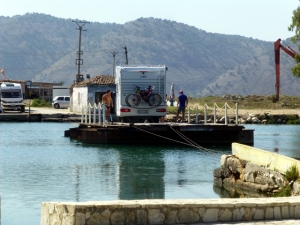 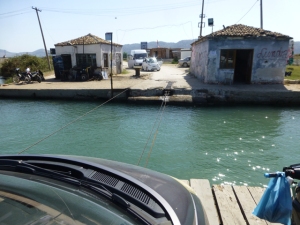 Looking at the map the greek border was ‘only down the road a bit’. My guide book said there were some interesting traditional houses just this side. So off we went. First the ferry. The suntanned, tattooed, stripped to his shorts and really fancied himself young chap waved us on, and on…and a bit more….AND A BIT MORE! I waited for the front of the car to plunge into the depths, taking us with it. A short clanking across for three euros and then a drive through a landscape of rushes and scruffy fields.

Lou negotiated his way around potholes and lumps and bumps. Cars with greek number plates came by. At one point we passed a tiny village with a couple of bars and a closed gas station. We drove on expecting a junction and another village. The going got slower although cars still passed us from the other direction. Finally the road surface gave way to dust and rocks. Enough, i said, we need the car to get us home. Greek border, interesting houses or not, please can we turn round? Reluctantly, lou gave in. I’d do it in a 4×4, he said. I’d let you in a 4×4, i replied! We drove back and now more cars came past, some quite fast given the conditions. Two motorbikes. Clearly foreigners, they were both wearing cradh helmets! 🙂 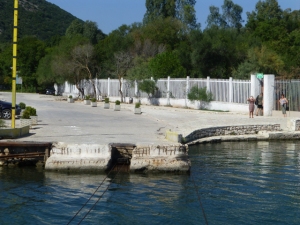 at the ferry we stopped to look at the pasha’s castle, part of the butrint site. We climbed up to the top of the walls, avoiding the workmen’s tools, and took the obligatory photos. Earlier, lou had commented that there were only so many photos you can take of stone ruins. Back at the ferry ‘fancies himself’ waved us right the very edge again while two french 4x4s (!) and a small albanian car squeezed on. Arriving at the other bank fh wasn’t happy so shouted to his mate in the engine house back on the other side to pull us out a bit and have another go at ramming the jetty. Ok, this time, so we were allowed off! Back to the hotel with no name for a restful zzz

1 Response to butrint and the border