cheap at half the price

Posted on September 20, 2015 by lynnefrancophile

On friday evening in sarande we played hunt the stamps. I had written a few postcards and needed stamps. Postboxes i had located. A lot of helpful people sent me to different shops but no stamps. 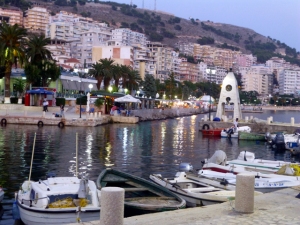 We had decided to wander along the prom to the little harbour to another recommended restaurant and my sketchy map said there was a post office near a museum. I finally found it up two flights of steps connecting two roads, (my knees and i will remember this holiday for the climbing!). The lady behind the counter said i needed three stamps for each card. I just about managed to stick them on without covering up the addresses!

The little harbour was sweet and the restaurant busy. We found a table near the water and had great pizza and downed a bottle of italian gavi.

‘A bottle!’ The waiter had asked as if we were utter old soaks. Wine is mainly sold by the glass here but can be awful and we felt like celebrating. A meander back with lou taking photos of the moon and me mooching among the souvenir stalls. A chap sent up blue lit helicoptor thingies which reminded me of the bund in shanghai. I bought a little bowl ( 1000 lek) for aperos and, further along from a boy on his own, a pretty embroidered purse (200 lek). all of 8.50 euros in total. 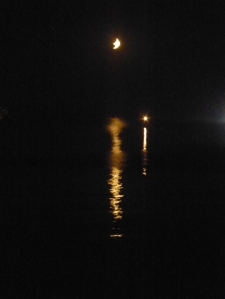 The bowl was our sort of price, the purse a stupid one. I told the young lad so but he replied no one would buy them at anything higher. It seemed rude to offer to pay more for it but we often feel we are taking advantage of such cheap living.

2 Responses to cheap at half the price