Posted on September 18, 2015 by lynnefrancophile

Our journey from berat to serande was alive with livestock! Before leaving berat i wanted to go up to the kale, castle. A very large walled edifice and full of houses.

We took the ‘better’ road up (it is all relative, we are learning) and lou did a bit of tyre squealing on the steep marble cobbles to arrive at the tiny parking. 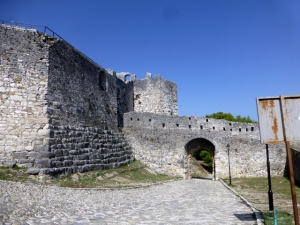 We explored some alleyways, watched a chap taking his chickens for a walk, saw a tethered sheep making short work of what look like a flowering shrub, looked out from some viewpoints but, even at 10 in the morning, the heat was beating down on us. 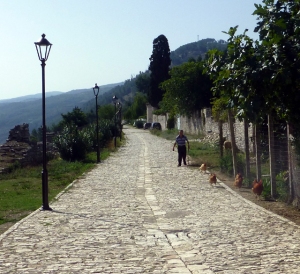 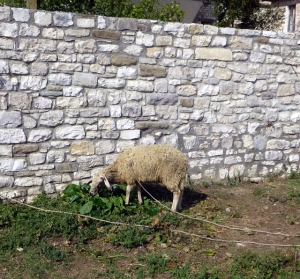 I bought a naff souvenir of which my brother would be envious and we beat a retreat to the car, just in time as four coach loads of tourists and school kids arrived. As we negotiated our way around the coaches a small boy appeared driving a flock of goats.

Almost as if he had been waiting to create a photo opportunity. His sister (?)came behind. They were across the path and out of sight very quickly. Why not in school,  i wondered.

We took the road back up to lushnje as we knew that one and then turned south to fier and onto vlore. South of vlore the road was beautiful. It wound along the coast revealing inviting little bays and shady palm trees. Chaps in local costume jumped out in front of the cat desperately waving you into their restaurants. We were peckish and so gave in to one of them and parked opposite a shaded terrace. 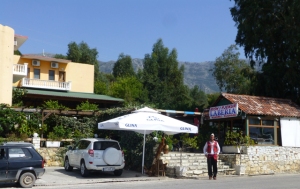 Whole sheep were turning on several spits in a covered bbq area but we stuck to seafood salad which was just right on such a hot day. In tirane we had passed a bbq shop with chicken turning on a spit and individual sheep heads complete with teeth and eyes!

I had read that you must be careful of the water but every bar or restaurant asks if you want a bottle and a make called terpelene seems to have cornered the market. Near sarande i saw the same name on a signpost so maybe it is a spa town? 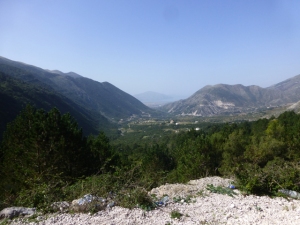 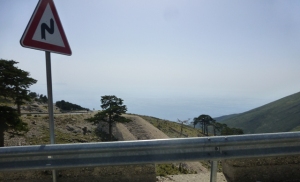 Driving on, the road began to twist inland and climb. The views began to open out and i began to see the albanian landscape i had seen in books etc. The occasional cow or three mooched into the road.

We climbed into a national park and the road got higher and higher. Arriving at what appeared to be the top we found ourselves looking down a vertiginous smooth mountainside that disappeared into the sea many metres down. 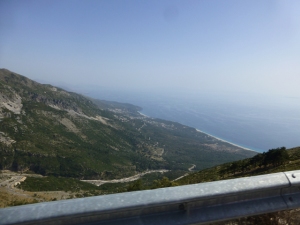 The spot height on the map said 1200 metres! The road was single lane and we descended down slowly through umpteen hairpin bends. No escape roads here!

Once more i took my hat off to ‘only the chauffeur’ who asked if i knew the road did this? Nope was the answer. Even when we got down near sea level the road continued to twist and turn through small villages and olive groves. 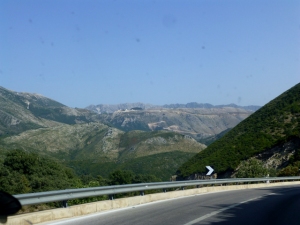 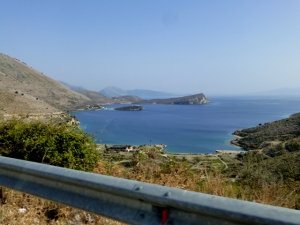 The drive was enlivened by occasional brushes with flocks of goats who refused to move, the odd cow and even a pig in one village heading very determinedly in the same direction as us.

Off on his hols? So it was with great relief that we arrived in sarande. But then came the great hotel hunt. Our gps doesn’t do co-ordinates for some reason and insists on telling us the road names we put in are ‘not known’. So, armed with a sketchy map from my guide book we toiled up and down the road full of hotels and apartments. Asking at one place we were told ’50 minutes away’. That took us out of town to some building sites! The phone kept telling me ‘unsuscribed’ when i rang. So i rang booking.com who were lovely. The chap looked on his map and told me which two hotels it was between. We found one but not the other. I asked some locals and they didn’t know. Lou pulled over yet again and asked a guy sitting outside his bar. He yelled at a chap watering some flowers who turned out to be eric ‘i tell you everything’ of our hotel. He couldn’t do enough for us. Showed us the parking, heaved both our bags up the stairs, one in each hand, to our room on the second floor and then brought us a free drink each. 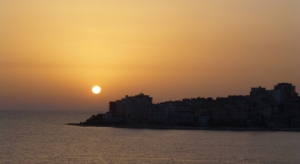 The room has an uninterrupted view of the sea and corfu and we have a tiny balcony with a table and chairs. Wonderful but why does the place not have a sign with its name. Zilch on the front! Lou says it should have a dirty great notice saying ‘lynne booked here’! 🙂

4 Responses to hotel what?