traipsing around tirana part one

Posted on September 16, 2015 by lynnefrancophile

Lou had good news and bad news yesterday. Good – the national art gallery was closed so he didn’t have to trail around after me, bad – a highly recommended restaurant in a lovely old ottoman building was closed too. The perils of doing sightseeing on a monday in tirana! 🙂

Some one told me that 80% of what there is to see is around the skanderbeg square but we walked further afield in the course of the day. It was very hot so that began to limit how much we did for any lengh of time. Away from the square it was easier to find tree lined streets and small parks for shade.

We started by heading for the clocktower which is written about as being a site tiranians are very proud of. Not proud enough to put it on a postcard or to charge an entrance fee. Lou declined but i decided i did want to climb the 93 steps to the top. A girl in a nearby teeny museum with holes in the floor unlocked the wooden door so i could begin my ascent! 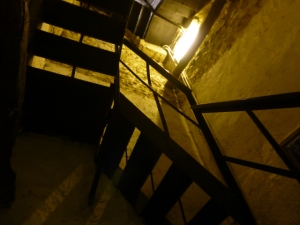 A tad narrow and rather like climbing a ladder but up i went. I’d love to say the view was worth it but tirana doesn’t have a majestic skyline.

However, i had a bird’s eye view of the neighbouring mosque and the square although i couldn’t help noticing the layer of pollution over the tops of the distant suburbs. Back down the ladder and into the sunshine. Then it was the turn of the mosque.

It looked shut but trying the door brought a chap to it who waved us in but asked that we remove our shoes.

The inner room was decorated on every surface and i was surprised to see representative art. No figures but stylised flowers and even buildings. Lack of a tourist orientated system meant, again there was no charge but, also, no books or leaflet to tell you more about the place.

The two men in charge were as helpful as they could be with only a couple of words of english eg ‘English? Liverpool? Manchester?’ One proudly showed me a copy of the koran in english and opened it at a page that corresponded to an embroidered arabic text on the wall. The other jingled small change in his hand and we whispered to each other regarding euro notes! Gesturing to the balcony above we were shown to a small door and a tiny flight of steps cut into the stone wall. A bit of a squeeze but we made it up and, even more amazingly, given my dodgy knees, back down again. We had been allowed to take photos and despite being told i didn’t need to i had stuck my sunhat on. We felt grateful for the experience and after putting our shoes back on, said goodbye and passed across a ten euro note. That can buy a decent meal for two here so we hoped it was sufficient. There was a lot of a hand going to the heart and then it being offered to be shaken. The door shut and we were back outside in the blinding sunshine. I remarked to lou, how long before there will be a kiosk outside selling entrance tickets and umpteen stalls selling religious trinkets as we had found in padua outside the basilica? Needing to escape heat we backtracked to ‘our’boulevard to find a shady table for coffee. Poring over our two not very good city centre maps we decided to combine a bit more wandering the sights with looking for good place for lunch. Jumping puddles and broken paving stones and clinging to each other as we crossed roads we found the pedestrianised street that began behind the building of a huge new block and a small shady park.

The park had several sculped heads of different chaps and there were many groups of men playing dominoes. We sauntered past the remains of some ancient city foundations, didn’t find the ottoman house but did see a remnant of wall and wooden door hiding a plot of waste ground. 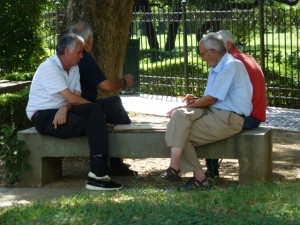 A couple of souvenir shops yielded a magnet and a few heat curled postcards. 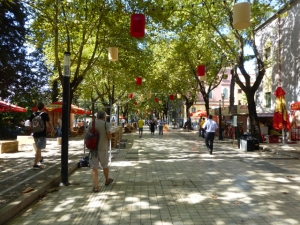 Circling back we discovered the lovely old building that houses the recommended restaurant but it was shut! Using my invaluable bradt guide we found an alternative with a lovely tree shaded terrace where we tried the albanian choices on the menu. 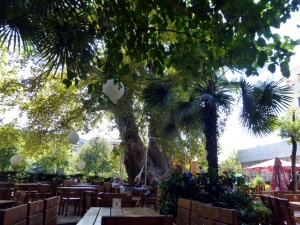 4 Responses to traipsing around tirana part one