Posted on September 14, 2015 by lynnefrancophile

We may have been concentrating on the traffic and cyclists with a death wish but we did gather some first impressions on the drive down to tirana. Lou was fascinated by the overwhelming number of gas stations. His enthusiasm spread to me and we began to look for each new name. He spotted and i jotted! We reached thirty three different companies. These all looked like major chains as each had all the usual accessories of huge canopies with name and prices on tall signs. My favourite was ‘kastrati’ oil. I’m very shallow!

At the croation border point goats had ambled through from the albanian side with no one taking any notice. Once in albania we saw horses and cattle grazing on various bits of roadside grass or even on traffic islands.

Milo had warned us that driving in albania was slow because of the horse and carts. They were about the only vehicles moving slowly! Stray dogs roamed and snuffled around the bins and, due to the careless driving, several dead ones lay abandonned in the road. There were a lot of big bins. I wondered why people didn’t put their rubbish in them, seeming to prefer to dump it next to each one. Then i began to notice the men and women who were methodically rooting through each bin and discarding unwanted items any old where. Looking for food? Things that can be sold on for recycling? The country houses we passed were individually built with colourful rendering.

They were set in gardens full of produce and, often, with vine covered porches. We saw fields with old fashioned stooks of straw and in one, three people sat up to their waists in maize debris as they ripped the corn cobs from their husks. Here in tirana there is a mix of spanking new and crumbling into decay.

Our hotel and the spotless and beautifully decorated restaurant we ate in last night sit opposite a row of dilapidated buildings with coils of electrical cable snaking down their front walls and across the pavement. 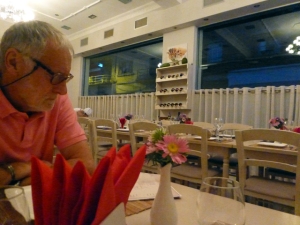 Off the main road with its bars and good shops at the end of our street lie piles of rubble, scruffy blocks of flats, people selling cigarettes out of suitcases and shoeshine ‘boys’. 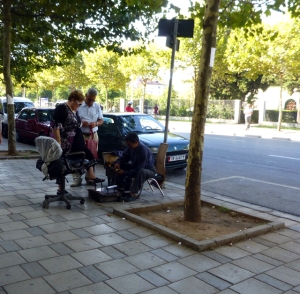 This morning a woman suddenly stopped in front of me to scavenge in a big bin. A bit like some city dwellers in the uk who can never pass a skip?  🙂