Posted on September 15, 2014 by lynnefrancophile

well it had to happen. we’ve had glorious weather for the whole trip but today has started grey and lou says the meteo is forecasting storms this morning and showers this afternoon. good job we’ve planned a museum visit!

we arrived yesterday after following the coast from toulon rather than the motorway. tom tom had a few wobbles, like taking us through the centre of st cyr la mer and its wonderful but narrow plane tree lined main street and not being able to count the number of exits on some roundabouts. the views of the bay at bandol were pretty and from the forest behind the calanques approaching cassis quite spectacular if we weren’t all sceneryed out by corsica! before marseille we came over la gineste, a wild and open landscape that has an army firing range in the middle!

tom tom did his best to find the hotel but was frustrated by a number of closed streets. we noticed a lot of police around and then spotted a few tired runners with numbers on. we had arrived at the tail end of a city marathon! down a back street off a wide boulevard with trams lines down the middle (rue de la republique, of course!) we found the b and b hotel with its teensy car park under the building. we did the booking in bit and then went off to find drinks and plan the rest of the day.

a lively brasserie just across from here in the place joliette was doing good business so we sat ourselves down. watching large plates of huge burgers with chips made our mouths water so we ordered two ‘chessy’ burgers with chips and salad but mine ‘sans fromage’. with a cinquante of rose we sat under a blue sky and enjoyed the view. 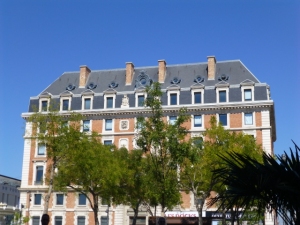 across the ‘place’ was the old building called ‘les docks’, former dock warehouses now being turned into shops, offices and restaurants. across from there was a huge modern building called ‘les terraces du port’. we went to explore after lunch and found an enormous and very modern shopping mall over three floors boasting 190 boutiques and restaurants. 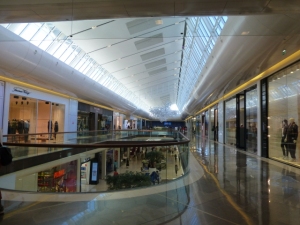 amazingly, it was all open even though it was sunday and doesn’t close until 10pm and 1 in the morning for the restaurants. we sailed up on the escalators and wandered around ‘window licking’ as the french call it. up on the top floor we found the real ‘terraces’ which stretch the length of the building and overlook the docks.

we watched a ferry arrive from tunisia and could see others away to our right.  back downstairs we decided a little sieste wouldn’t do any harm and we hadn’t yet collected our stuff from the car and settled into our room up on the sixth floor…no, sad to say, no view of the water!

later, armed with a map we had been given by the tourist office desk in ‘les terraces’ we walked straight down the rue de la republique to the vieux port. 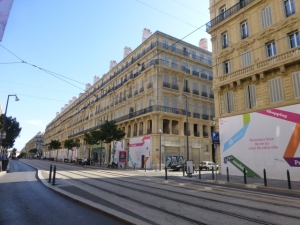 the boulevard is lined with blocks of six storey apartment buildings all in the same style that are being renovated; some are still lived in, some in the process of being gutted and some with signs saying ‘new flat for sale’.  i wondered where the old tenants are being housed while all this urban renewal goes on. walking back later we popped into a small corner shop and bar to buy some bits and bobs. outside elderly arab and chinese men and women were playing cards and dominoes at pavement tables. a young man came up to the till while we were waiting to pay and asked for ‘deux’. he was given two single cigarettes and paid three euros for them. what a contrast with the shoppers and diners in ‘les terraces’! 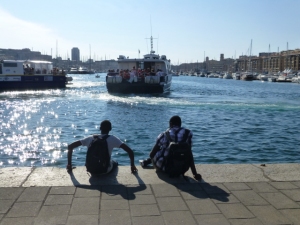 the vieux port is huge and lively. rows and rows of bars, cafes and restaurants everywhere you look. on the water rows and rows of boats of every size, ferries leaving regularly and a busy metro station in the middle of the enormous concourse between the water and the road at the innermost edge. its roof is mirrored on the underside and you get a disorienting view of passersby as you gaze up at it. 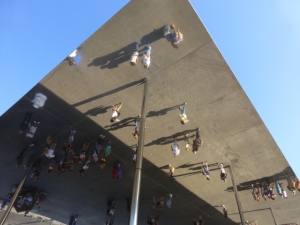 we walked on around the port following the notre dame de la garde walk without any intention of climbing up to notre dame itself, a church that can be seen from every point in marseille. 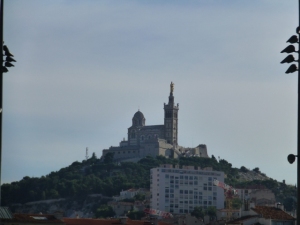 we climbed as far as abbaye saint victor, a rather austere fortress-like church towards the eastern end of the vieux port. 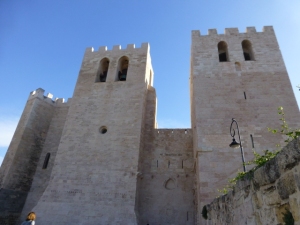 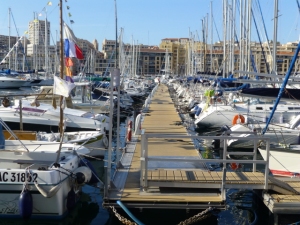 from there we walked down some steps to the quay and back along towards the rue d’orves, a wide street that was more like a ‘place’. full of bars (as is everywhere!) we sat in the shade of one opposite the art and craft museum, closed mondays!  sipping a cool glass of rose and people watching was very pleasant as the whole range of marseille life passed by. multicultural, multiracial and all ages and groupings sat and drank or walked and talked or did a bit of all four! 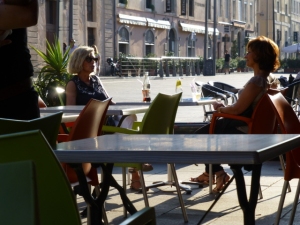