Posted on September 16, 2014 by lynnefrancophile

a slow start to our full day in marseille. the breakfast baguette tasted like yesterday’s bread but slathered with butter and apricot jam you almost didn’t notice! from the open window in our room we can hear a bird singing. we assume it is a bird. some sort of songbird but the constant whistling is a bit repetitive. ‘bet that pleases the neighbours’, lou said.

our french neighbours in calvi, on hearing we were coming to marseille, recommended that we visit the new museum, mucem, as it is ‘fabuleux’ and it was. we strolled down the quai de la jolliette past more buildings being refurbished for ‘commerces et restaurants’. with the ongoing ‘crise’ one wonders where all the entrepreneurs who are going to set up businesses will come from. further down the quay another big ferry from tunisia had arrived and was offloading. the threatened bad weather didn’t seem to be arriving either and i began to feel quite hot in the sunshine.

as we approached the area where mucem is located we found a big open area housing another museum as well. the ‘villa mediterranie’ is housed in a magnificent cantilevered building, maybe inspired by the prow of a ship, i wondered? 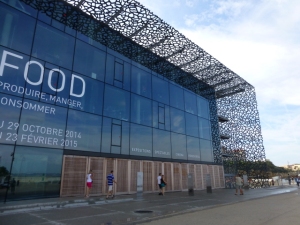 we used the time to take photos of the sea, the harbour, the church behind us, the boats……. 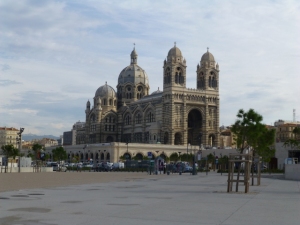 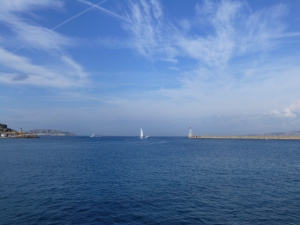 in the museum we got a reduction due to age, not something that happens that often in france.  mucem concentrates on the history of the peoples around the mediterranean and looked at three main areas; cultivation, communication and religion. finding water has always been a concern and there were various models and artifacts used to find and pump it. we spent ages touring all the exhibits and reading the notices which were thoughtfully translated into english. there were no temporary exhibitions so we moved on upstairs to the roof terrace which has a ‘passerelle’ across to the fort st jean.

there were more exhibitions spaces over there as well as a lot of steps and paths all round the different buildings inside the fort. we went into an exhibition of five young artists and their conceptual (always a warning in that word!) video work concerning today’s casablanca.  oddly there was an exhibit of puppets- why do they always have such scary faces?- and a large model of circuses/circii? a bit random, we thought. 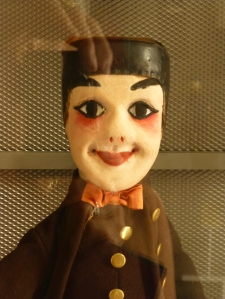 it was now well into the lunch hour and the sun was beating down (we both had raincoats in our back packs!) so we left the fort and walked along the vieux port looking for a menu that would suit. one offering salad nicoise with fresh capers sounded just right.

afterwards, lou asked where i was taking him. he is well used to my study of places we visit and he traipses along ‘following the flag’ as he calls it. (today we saw a group following an umbrella!). so off we went to look at the three buildings the germans didn’t blow up when they blew up the ‘le panier’ area in 1943 and deported 15, 000 inhabitants to camps at frejus. i can quote accurate figures because it was written into the street surface as we left the fort.

personally i couldn’t see why the buildings had been saved. they are pretty ugly although one had the distinction of being lifted on jacks and turned through a 90 degree angle when the road was relaid.

the next landmark turned out to be a steep flight of steps called ‘accoules’. no idea what it means but up them we toiled and down the other side.

then a winding walk trying to follow the map and the road signs to the hospice de la vieille charite. it contains a couple of museums but both were closed on mondays. the building appears enormous even if you weren’t approaching it through narrow streets of very tall, thin buildings. a peaceful place where people loitered in its cloisters and pigeons pottered. 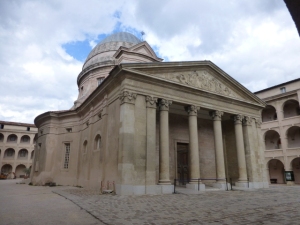 by now we hankered for a little pause in our day so walked back to la jolliette and snoozed a bit having decided we would go back down to the vieux port in the evening and try our first boullabaise in the town that made it famous.

which we did and very good it was too. we looked at several menus but went for a reasonably priced one (prices ranged from 24 to 69 euros!) at a restaurant doing roaring business, always a good sign. we sat inside as the terrace was full but that only meant we got to see a lot of the backstage action and were still close enough to the open doors to hear the evening buzz of the harbour. we both suffered the ignominy of having bibs tied around our necks as did all the other customers! 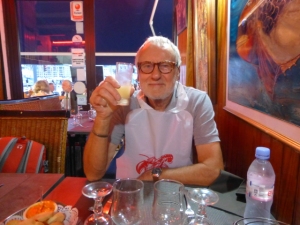 a stroll back up rue de la republique which started its fete yesterday. the pavement carried printed signs heralding 150 years of business and earlier there had been announcements over the street tannoy about upcoming events. odd thing to celebrate when all the shops fronts are boarded up!

i would love to come back and see how la jolliette looks when it is all finished. a good excuse to revisit to such a lively place!