last, last bit of a day in calvi

Posted on September 14, 2014 by lynnefrancophile

well, this holiday i have gobsmacked lou by managing to get up BEFORE 5 o’clock to catch the ferry to calvi and then getting up yesterday at seven, breakfasting,showering, drying hair, putting on the slap, packing the last bits, cleaning the chalet, chatting to the neighbours as we gave them our last perishables and getting away by 9 o’clock….mmmm, maybe not such a good idea as i may have set a trend i’d rather not continue! 🙂

a bit traumatic waiting to get the all clear re the state of the chalet from the chap who zooms around on his buggy and uses a walkie talkie to tell the girls in the office if i did ok. i did, so got the ‘caution’  (300 euros) and cleaning deposit back. well, really, 70 euros to clean a 16 square metre space…andy, take note!

we drove straight to l’ile rousse as planned and parked up in the car park right by the dock gates so we wouldn’t be caught out in a long queue. then it was off to find coffee, comme d’hab and then explore the town.

the dock is out on a spur of rock behind the marina and the walk revealed the first genoise tower that i have seen close up. small and the same colour as the rock upon which it sat, no wonder i haven’t been able to spot them in long distance views. 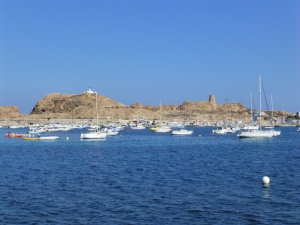 ile rousse is a pretty town, full of alleyways and steps and with a pentaque competition going on in every conceivable space. 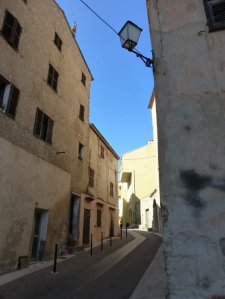 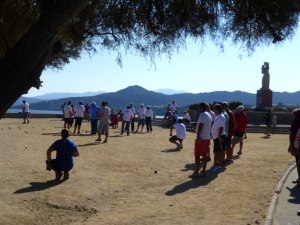 in the town square there was even banked seating where you could watch the goings-on. we sat on a bench in the shade for a time. 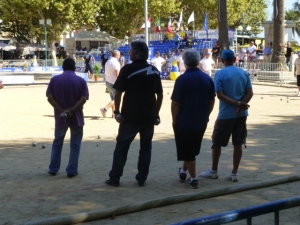 we had already found a market under the halle and i had bought a slab of tarte aux herbes (well, bletes and onions) and a small chestnut cake to keep the hunger pangs at bay on the crossing. 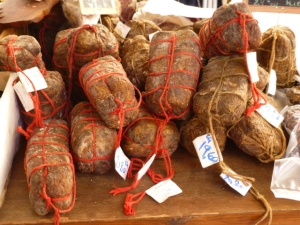 we had read a sign that said the dock gates opened two hours before sailing so we strolled back to the restaurant that we’d had coffee in and ordered two jambon and mozzarella panini. with a ‘pression’ and an orangina we felt ready for the foray that loading might be. and it was! four lanes of cars, that we could see, that had waited in the boiling sun (i had festooned everything i could lay my hands on the keep out the heat) all keen to get on board. 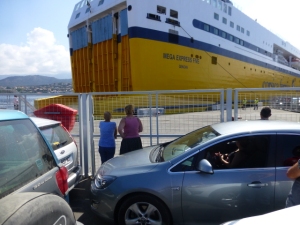 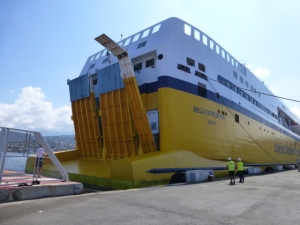 oddly, when the ferry arrived, late and loading started, they waved on the latest cars to arrive. strange, we thought. then lou decided they were probably putting them up on the ‘shelf’ and indeed they had. so we might get off quickly then, we thought. mistakenly, as it turned out!

the crossing was calm and sunny and the canned music repeated itself constantly. we managed to get the last bit of banquette seating along the side wall of the bar so could lean back when not reading, playing word games, going out to look at the sea or buying drinks. we guarded it jealously and opted to stay put and eat the sandwiches i had made as it was clear that we would never find a place to sit again if we left. the same passengers walked round and round pathetically and their numbers were swelled when the cabin passengers were told to leave their cabins an hour before we docked which turned into an hour and a half as we were late getting in. 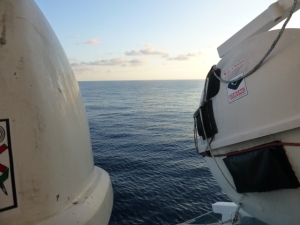 a major excitement was suddenly spotting a whale spouting water. we both turned at the same moment and glimpsed it. i went out a bit later and saw it again…magic! lou went out with his camera but it is not the sort of thing that happens on cue! 🙂 sadly the ferries are built to get you across the water, not to look at it and viewing points are few and always crowded. 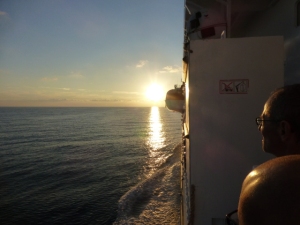 we were told we would dock at 9.40 and maybe we did but by then we were jammed in a corridor (oh, the claustrophobia) trying to find the way to deck 3, zone 5. we knew where we had to go but the signs were non existent. finally lou realised that next to the sign that said deck six was a door to the stairs that led to deck 5, 4 and three!

at the car i climbed across lou’s seat to get into mine as we had been directed to park so close to the wall i couldn’t get out of my door. ‘avante, avante, gauche, gauche, droit, droit’ the chap yelled. i’m surprised lou didn’t slap him!

the usual (we now realise) mayhem to disembark. we think the priority loading people came on at the absolute last minute and parked facing everyone else. we watched as they all had to reverse and turn in a limited space plus some drivers hadn’t even managed to find their cars when the ramps eventually went down. as we drove off i saw that the other side of the boat was already empty!

but finally we were off and driving along the dock, part of a huge stream of traffic. i was amazed to hear crickets chirping on a concrete dock and in the dark! 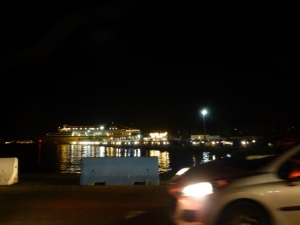 tom tom got us back quickly to the b and b hotel and i sank gratefully into their lovely, comfy bed…with a cup of redbush tea, bien sur! 🙂

2 Responses to last, last bit of a day in calvi