a bit of a pause….to slurp!

Posted on September 13, 2014 by lynnefrancophile

Our last full day. ‘sniff’. It feels cooler but the sun is shining. Yesterday was a lazy morning as advertised but I did go for a swim around midday. The beach was pretty empty and only two or three people in the water. I swam about revelling in the blue sea, blue sky, calvi shining in the sunshine in front of me across the ‘golfe’ when, right on cue, a flock of white birds flew overhead and started to spiral and soar. No noise so i’m guessing not seagulls and just a perfect addition to the scene.

After lunch we went off to find the route des vins. A lady in the office had dug out a brochure and the chap in the shop had recommended a domaine called ‘orsini’ at the village of calenzana, described in one guide book as the summer retreat for marseille gangsters! We managed to do a tour of the back roads of calvi before finding the one we wanted. Daft really as there are so few yellow roads on corsica!

The domaine orsini starts unpromisingly; a turning through some rather ugly new buildings but soon you start to climb (don’t you always on this island?) and then the vineyard starts and then amongst some trees there is the main building. 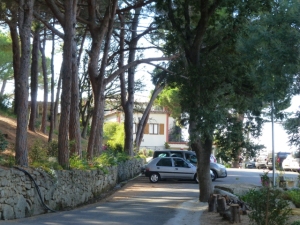 We parked and noticed quite a few cars but nothing prepared us for the experience we were about to have. Through sliding doors we were met by a tasteful shop and a girl who waved us on to the next ‘salle’. There in a room full of prettily wrapped ‘paniers’ a chap gave us some leaflets and a short introductory speech about the domaine and its products, sweets, jams, wines, liqueurs…. then up a slope (not good for negotiating after tasting!) and into a long low ceilinged room with comfy banquette seating arranged as little booths. Yet again we were taken in charge by a young girl who waved us into an empty space and presented us with a plate of sweets and two glasses. 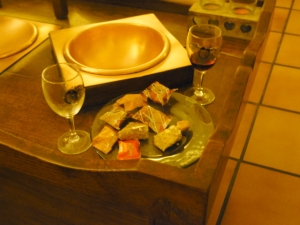 Around us people were similarly sat. we were clearly part of a very well organised machine! Three girls whisked about offering wine, jam (oh, so that’s what the funny little platform was for above the table  as i watched a huge tray of jams for tasting balanced on next door’s), liqueurs and eau de vies. Apparently we were supposed to consult the long list given to us by the chap and make our requests. We played our part and tasted our way through two pinks and a red and an eau de vie plus nibbling on our sweets which seemed an odd thing to be doing when tasting wine. Later I realised the little dry biscuits were a speciality of the village and we should have dunked them in our white wine….but we didn’t taste that! Thanking the girls we went back through the panier room to the shop and made our purchases adding a pot of sanglier pate. We had bought a bottle of eau de vie de myrthe (myrtille) although I have to admit, lovely as it was, it reminded me slightly of infant cough mixture. Now that would be a great winter cold cure! 🙂 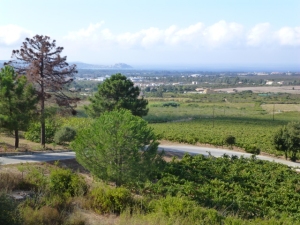 To round off the afternoon we carried on along the d151, now that we had found it, to visit some of the other ‘fortress’ villages of the balagne which is how they are described in the guide books. Up and down and round and round until we came to zilla and stopped for afternoon coffee. 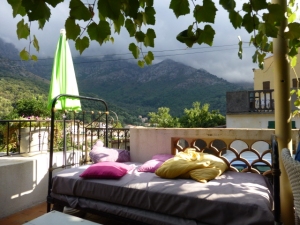 Several people were sitting outside around a small square and we had noticed garden chairs outside several houses, ready for some sitting and chatting. A small boy puffed past lugging his school bag on wheels. We had passed the poor chap back outside the village school several bends below. They breed them tough up there!

Coffees drunk and alleyways explored and photographed we moved on…and on…and up…and up! 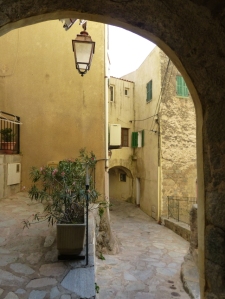 Past cassano, past montegrosso, past the cloud line! 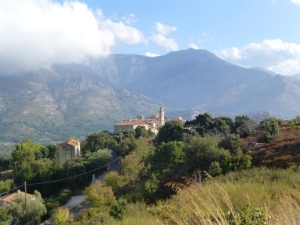 We had seen the lowering black clouds from zilla and now we were driving through them. In gaps we could see the sunlit slopes below us so we had to stop to record the moment, of course! 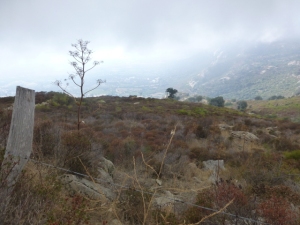 Then down again to find the road to lumio. Road signs here are invariably damaged in some way and these were in two languages, french and corsican (I’m guessing). It was the french names that had been spraycanned out!

Back to our nest for a meal chez vanina with the opportunist ginger cat making a short but unsuccessful visit.