Posted on September 11, 2014 by lynnefrancophile

there was some debate yesterday morning about where we should go as lou had found the driving through constantly twisting roads very tiring. having consulted the map he decided to bite the bullet and off we went! the road south of calvi, the d81b for anyone who feels like a challenge, should come with a health warning. the first part is lovely offering wonderful views of the azur waters below.

but then the surface all but disappears as you wind through a landscape of maquis and hills. the map said there were two ruins of genoise towers. we didn’t see them but what we did see was as beautiful as ever.

although the road surface didn’t improve and seemed to worsen! 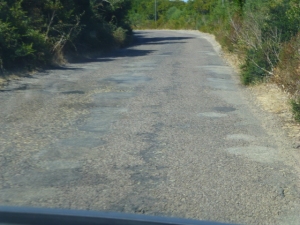 we were heading for porto which via michelin had said was one and a half hours away…it took us two and a half! with nowhere to stop i wildly pointed the camera at views and clicked hopefully. 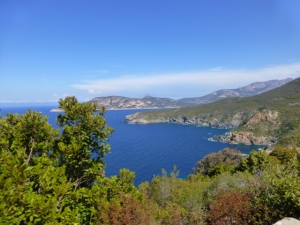 from high above we saw galeria behind its beach but we went straight (!) on. 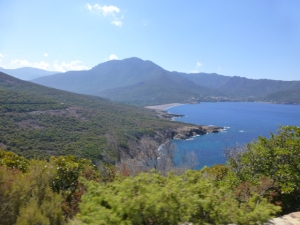 we laboured up to the col de painfarella along with straining cyclists, motorcyclists and assorted vehicles. it must be hell in high season but your speed is slow as you navigate the bends. i only squeaked a bit when the drop seemed very close to my side of the car! 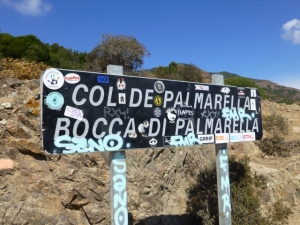 at the col everyone was taking a breather and photos, of course. i took one of the view behind us and then walked to the view on the other side. it was awesome, an overworked adjective but in this context exactly right. i felt my eyes begin to water at the sheer majesty of it. 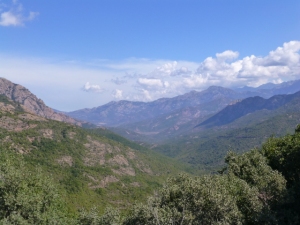 a photograph doesn’t do it any justice at all!

onwards we toiled past the stopping places full of weary cyclists or tourists holding cameras aloft.

past the golfe de girolata, the only village on corsica that can’t be reached by cars (what a blessing for the inhabitants! ) with the nature reserve of scandola in the background. the road wound round rocky outcrops and we could see it on the other side of the gorges as a small cut into the forested hillsides. 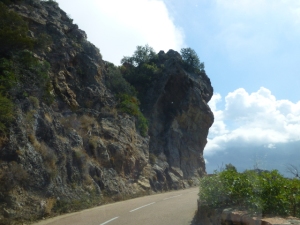 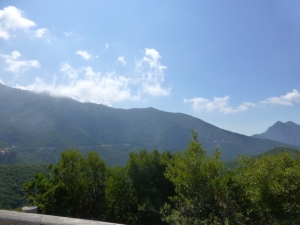 stare hard and you may just make it out! 🙂 at the col or ‘bocca a croce’ we stopped for drinks and, hopefully, a pee. drinks but no milk so no cafe au lait and no toilets. no filling your water bottles either. a message we were going to see a lot in various cafes along the way. we were travelling through walking country. rather them than me!

finally porto below us although this photo is of the golfe de porto due to rampant maquis getting in the way!

then it was the drive along les calanches, incredible rocky edifices eroded into whatever shape your imagination desired.

turning round and heading back to porto but not going into it, we took the road up to evisa and the spelunca gorge. by now it was getting on into the mid afternoon and we were undecided as to which way to drive home. the thought of three hours back along those roads was not encouraging however beautiful the views!  around a corner we suddenly came upon some goats. we had hoped they were the mythic corsican mouflon but maybe not. 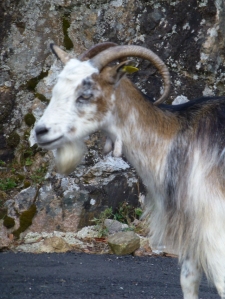 the spelunca gorge is walkable and boats not one but two genoise bridges but yesterday was not the day despite us being prepared with boots and sticks in the boot! up and up we went and stopped for welcome drinks in evisa where i bought some local chestnut jam. poring over the map we decided that going up over the col de vergio and down the valley beyond may be a better option. it still twisted and turned but now we had the forest aitone and its incredibly tall pine trees with glimpses of the high sunlit granite mountains beyond.

the col de vergio gave views to the east with a lot of cloud and we drove through wet roads and saw a rainbow as we descended. the lower part of the d84 took us through nightmare twists again with sheer drops on my side and steep rock walls  on lou’s. even so a local driver indicated wildly and zoomed past at a crazy speed on a road that had everyone squeezing past each other. we watched as he took on a coach further along!

home through a rainstorm but sunshine on the coast. dinner in the campsite restaurant to make up for the picnic in a layby somewhere near orsino!

today? lazing on the campsite and then taking the route des vins this afternoon…..