Posted on September 10, 2014 by lynnefrancophile

for our anniversary we had decided on a gentle day driving to st florent for lunch and then, maybe, on to bastia for a spot of sightseeing….wrong! the road to st florent crosses the desert des agriates. in my mind desert conjures up pictures of a wide, dry, FLAT landscape…but this is corsica and nothing seems to be flat here except the sea!

the road climbed and climbed and the scenery spread out below and beyond us in layers of mountain ranges in varying shades of blue and grey.

this was the first of many stops ‘to get a photo’. sometimes it wasn’t possible as other people squeezed into any available space to take their own. we finally came to the top of a col and there on the other side stretched a much wilder landscape with the distant bay and headland of the cap corse, although i didn’t recognise it as such until the journey home.

a very twisty drive followed which took some time but eventually we caught sight of st florent lying sunlit against the mountains with glorious blue sea in front. no space to stop for a photo and no space for us to park when we arrived ‘centre ville’. it seemed a bit too busy for us so we drove on towards patrimonio, a delightful sounding village. there we found a restaurant by the road with a shady terrace and plenty of space to park and offering corsican dishes. perfect! 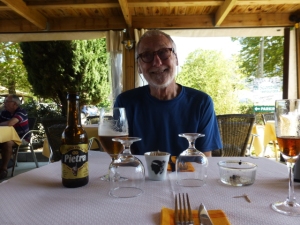 we settled down to our aperos and ordered a menu strong on corsican ham and sanglier. a beautiful tortoiseshell cat roamed the tables expectantly.

before we left there was a nice moment as during some banter about the year 67 i mentioned that it was indeed a good year as we had got married in it and today was our anniversary. ‘oh, you must have a myrth’ the chap said and offered us a drop of myrtille liqueur each. so it was with a warm glow we set off to find bastia. the road took us over another col and this time we found space to park. the col sign as many others on corsica seems to have been deliberately damaged. 🙂

more winding road and then, eventually, a glimpse of bastia or, rather, the etang and industrial area to the south of it. we arrived in the centre ville and drove around and around following car park signs but finding them all ‘complet’. cars waited in the road as other people left precious spaces. finally we gave up and took the road out of town…and, of course, spotted a space. quickly making it our own we left the car and walked back down past the lycee, the gendarmerie and the bus and train stations….

then a stroll around the ‘vieux port’ and back to the car. 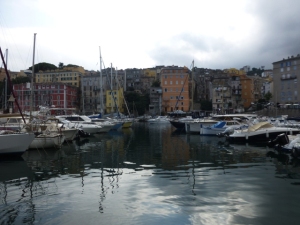 for the ride home we decided to take a detour to find the chapel de san michel that sian and chris had told us about (they were here earlier on the year) so we took to the hills (where else? this is corsica!) and chugged upward past the defile de lancone, a deep cleft to our right and finally came to the sign for murato. suddenly the chapel came into view. there was no missing its green and white chessboard facade made up of marble and serpentine. we stopped and i clambered over the wall and found my way into the dear little place, choral music playing and a guardian watching over the visitors. i took pictures for sian (it was shut when she came) and bought booklets in french and english to remember it by. 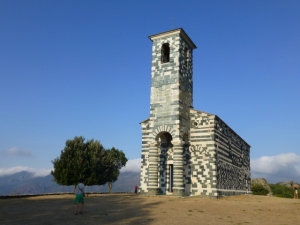 lou had decided the quickest (sic) way home was back to st florent and over the desert des agriates so that’s what we did. back around the twisty bends and one stop for a photo although we could have done more. along the road towards l’ile rousse we finally found a space at the ‘point de vue’ where we both snapped away at the gorgeous bay behind us bathed in the evening sun.

back home for a snack of leftovers and an early night…wears you out, all this eating and gawping! 🙂