only a kilometre to go!

Posted on September 9, 2014 by lynnefrancophile

yesterday was back in the car to visit corte, the celebrated central town of corsica, seat of the first university on corsica and headquarters of the revolutionary pascal paoli’s government. we found a pretty mountain village, brimming with cafes and steep, stepped ‘ramps’. we had reached it via the n197, the road to everywhere if the signs were to be believed! the scenery along the coast and into the mountains defies description. suffice to say, i just kept uttering ‘wow’! 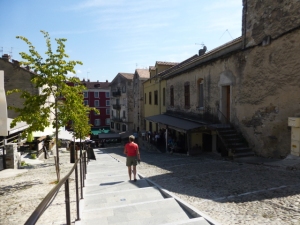 after our obligatory coffee and pression the smells from the various eateries were making our mouths water and our tummies rumble so the walk around town was short but took in the main delights and several photo opportunities.

i dodged into the tiny but beautifully painted little church whose name i can’t find and bought some postcards before we headed back to the car and our picnic lunch we were ready for! 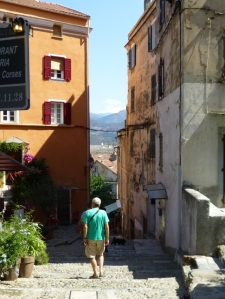 after driving back along the n193 to the turning for the asco valley we found a picnic spot and then, fully replete, drove on upwards, dodging our first encounter with grazing cows on the road.

we decided they wouldn’t be any good for a roadkill bbq as their ribs seemed to have hardly any flesh on them.

the road wound up and up and ‘wow’ was repeated a lot! the rock wall on one side hung over the road and the white line down the middle was purely decorative as we had to squeeze past any oncoming traffic or use a passing space. it occurred to me that the overhang was more desirable than the cliff edge we would have to hug on the way back down!

at asco we parked and looked for the path down to the genoise bridge that i had read about. thoughts of a cool swim came to mind. 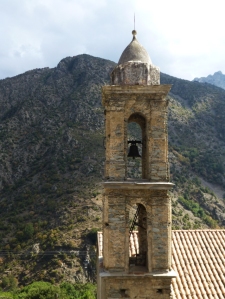 we had expected cooler weather in the mountains having seen them shrouded in cloud from the coast but it was very hot up there. a helpful chap told us ‘tout droit, tout droit et, apres, tombe pour un kilometre’ emphasising the tombe as if we were gong to dive off a cliff! finally finding the route down we were surprised to see a tarmac road and cars driving past us. nonetheless we trudged down the hairpins with the sound of the water below us somewhere.

round the final bend and there it was, tiny but beautifully proportioned.

built presumably with local stone it blended into the landscape as if it had always been there. photos taken, i clambered down to the water as elegantly as my creaky knees allow and sank my feet into the cool water. not deep enough for the anticipated swim but cooling enough.

lou joined me and together we sat and listened to the chatter of two older ladies in cossies. they’re waiting to skinnydip, lou opined, after we’ve gone. eventually we dragged ourselves away and trekked back up the slope. cloud was coming down on the mountains tops and as we sat with cold drinks and a choc ice (me) and attendant donkey, yes, really, we heard thunder roll around the tops. 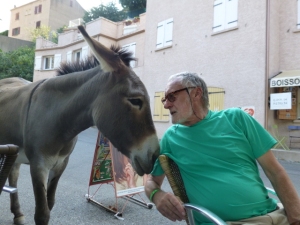 then it was back down the scary road. lou pulled over for some local drivers who drove at a pace that would have me shrieking or passing out with fright!

home along the stunning coast and takeaway pizza for supper…oh, my aching knees