a pied all day!

Posted on September 8, 2014 by lynnefrancophile

a day without the car to blow the cobwebs away!

after a deliberately slow start to the day, we needed to recover from the morning before, we took the boardwalk to calvi. the day was magnificent again, blue sea dotted with some impressive boats, mountains already veiled in heat haze and bodies flopped on the beach and in the sea. the walk is alongside the little railway line that runs between calvi and l’ile rousse and has the beach on one side and pine forest on the other. a pleasant breeze kept us cool in the hot sun.

at calvi we headed for the quai landry opposite the marina where the most expensive eateries are to be found. we wanted coffee and beer which was still a bit pricey but worth it for the pleasure in sitting in the shade watching the world go by. then we climbed an alley staircase up into the town and studied menus. lou fancied a salad and i was after moules.

lou’s salad and my moules were delicious and plentiful. we ate or rather, slurped in my case, drank our local pink wine and enjoyed the

ambiance and view. they even had some earl grey tea as my alternative to lou’s expresso.

leaving there and feeling very replete we trudged up the narrow street to the square above and contemplated the climb to the citadelle.

it had to be done! a lot of stairs and mutters of ‘oh, my knees’ and some fabulous views we got to the top. i dodged into the oratorio and was rewarded with a fetching shot from a window over the bay.

we passed a tour group now and again who were gamely dragging themselves from sight to sight with a commentary. interesting i’m sure but so lovely just to please ourselves on what and where to look. 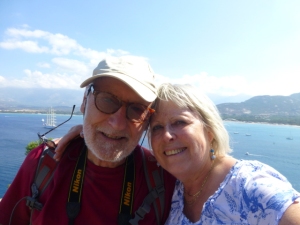 back down the stairs and steep alleyways with my knees complaining even more loudly and into the town proper for bread of both kinds, from the bank and the boulangerie.

a slower walk back along the boardwalk where lou wondered at how shallow the bay is the nearer to calvi you are. further out we could see speedboats pulling what looked like enormous lilos, presumably with people clinging to them who fell off at regular intervals judging from the many stops and returns of the speedboats.

at the campsite we shopped for some essential, light, supper provisions and after rinsing out some washing (gosh, i’m good) i went off for my first swim in the sea since 2012.  fabulous!