Posted on September 7, 2014 by lynnefrancophile

for regular readers, the usual complaint, got wifi but it is s-l-o-wwwww! 🙂 maybe i’ll find a cafe with a faster one. on the campsite we have paid 20 euros for a week’s worth of wifi but can only use one device at a time. my tablet doesn’t like it very much anyway.

so, we are in our little chalet amongst the pines and eucalyptus trees which makes for a wonderful perfume in the air. the chalet is like an old caravan in feel as there is everything we need but in a compact space. the veranda on the front looks towards the setting sun and we had aperos out there last night as we tried to forget the hassle of the crossing. 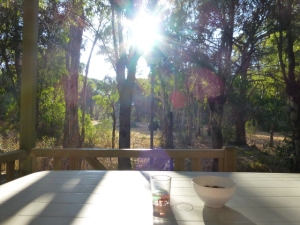 we did manage to get up even before the alarms set for 5 o’clock and got ourselves to the port in plenty of time, relying on the reception chap’s instructions rather than tom tom.

loading was hectic with cars still driving off as we drove on. we were directed to a corner at the sharp end which meant we would have to reverse out when the time came to leave. more of that later! we traipsed through corridors with little sense of direction due to lack of decent signs but find ourselves in a bar offering breakfast. with empty stomachs we sat down and ended up staying put for the duration as did many others. a calm crossing under blue skies but trying to get any kind of nourishment for lunch meant long queuing for limited options, some of which had run out by ten past twelve! p and o could teach corsican ferries a lot! 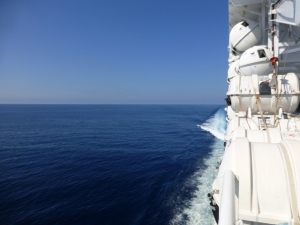 leaving was chaotic with  a chap waving out one car and then leaving the rest of us to back into the stream of cars leaving from further down the deck…nightmare! we got off eventually to be faced with five lanes of traffic trying to leave down one! the queue of cars waiting to load went on for ages. come here directly from the campsite next saturday, lou said, if we want to stand any chance of catching the afternoon boat back!

by the time i was paddling on the nearest bit of beach and gawping at the stunning vista of the bay and calvi the memory was fading….but not completely! 🙂

we ate in the campsite bar/cafe and tasted local charcuterie and cheese. the helpful owner said the cheese was brebis and came from a small local producer and i might find it in the camp shop. now that’s what we like to hear! our apero had been corsican rose, bien sur.  happy days!