Before we left the UK and retired to France my best friend and I decided to extend our regular lunch dates to include local places of interest that either neither of us or just one of us had visited.  I remember she took me to Brookwood cemetery which may sound gloomy but, as she promised, is a beautiful place full of flowering  rhododendrons if you go at the right time and is a very peaceful place for quiet reflection and long walks

Somewhere neither of us had visited was Farnborough Abbey despite knowing of its existence. This was quite ridiculous as both of us must have driven past it hundreds of times as it is on the main road less than three miles from the village where we had both lived for thirty years. (I say village because it had been back in the early 70s when we both moved there)  The abbey was founded by the Empress Eugenie in the late 1800s as a place for contemplation but also as a final resting place for her husband Napoleon the third.  So a French connection.  We enjoyed our visit and I treasure a tiny silver pill box I bought as a souvenir of our day.

Similarly, over here we have an abbey a bit further away than three miles but still one that I have known about but never visited.  Its most famous attraction is the canal des Moines, an amazing feat of 12th century engineering built to bring fresh water from the river Coiroux to the abbey.  A distance of around two kilometres.  Although founded near a spring the abbey required more water than the source could provide so a real case of necessity being the mother of invention.

With the one hour away driving rule this was a perfect choice.  We drove past the signpost for the abbey every time we went to Malemort on shopping or medical exoedition.  The gps was switched on in case there was a quicker way and, sure enough, it took us up a road we didn’t know which wound along a hillside looking down on a pretty valley.  Aubazine sits on a hilltop amongst other hilltops. 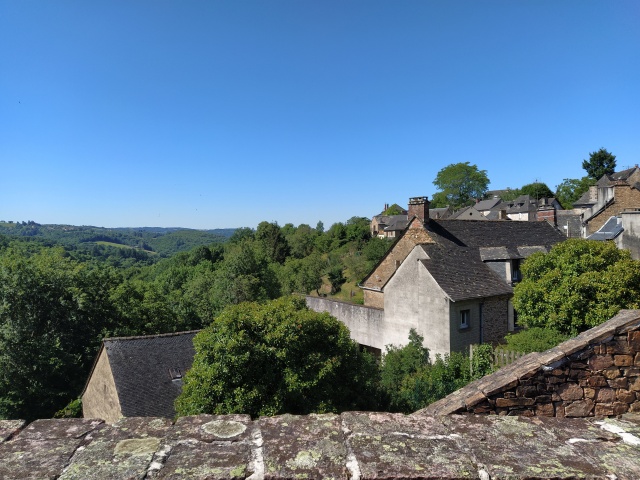 There weren’t many places to park, holiday makers?  ‘I’m only the chauffeur’ expertly slotted us into a space I wouldn’t have dreamed of trying, not far from the abbey. 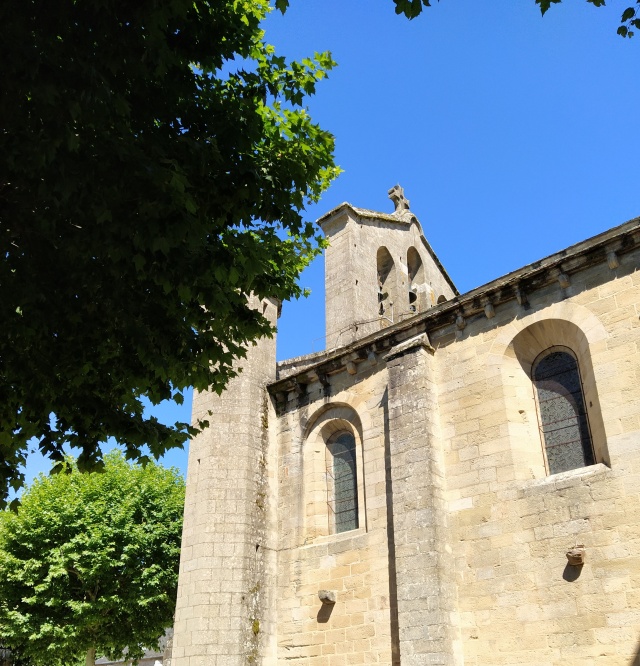 Across the road behind us was s sign for the start of the canal so we joined a few other tourists walking in the same direction but at a distance as the new reality advises. 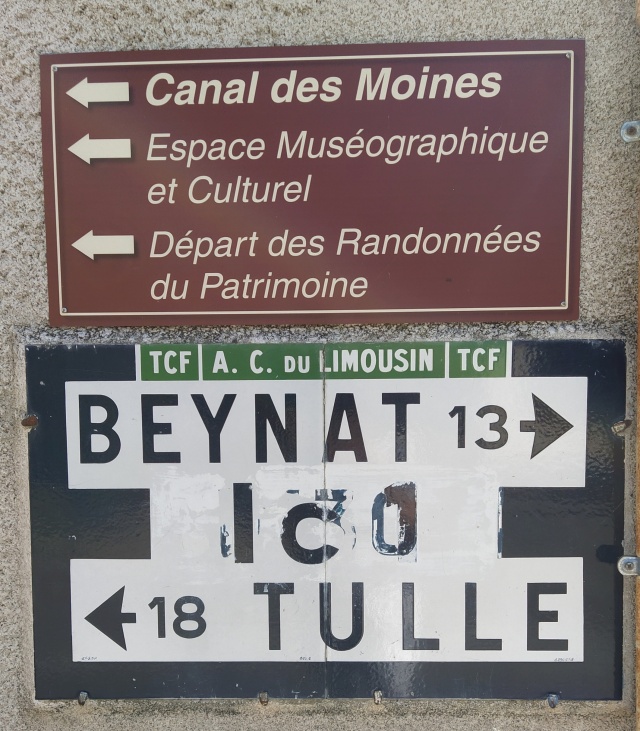 The start of the walk was a steep climb up a village street.  I hoped this wasn’t indicative of what was to come!  As we climbed higher we could hear the sound of water rushing over stones and there was the canal, tumbling down the rocks and into the valley below.  I said we’d been climbing! 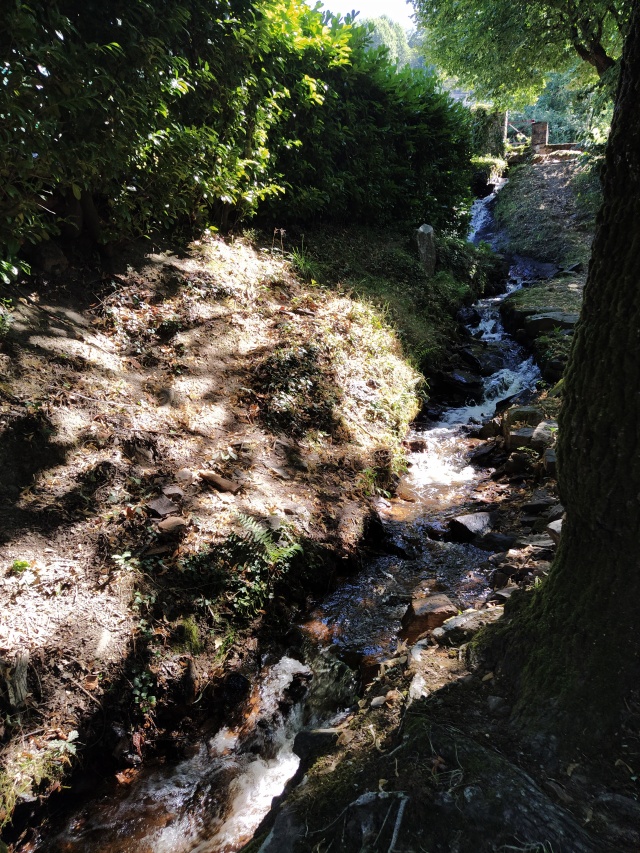 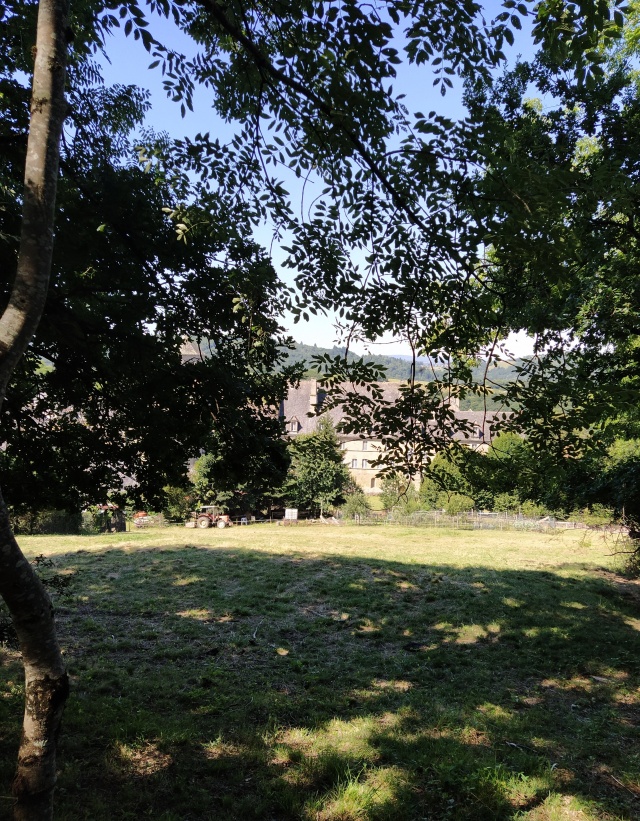 Up some steps, across a main road, past a lavoir and up another steep street.  But, at the top, the proper start of the walk.  There was a large information board and a smaller one reminding you of the dangers to come! 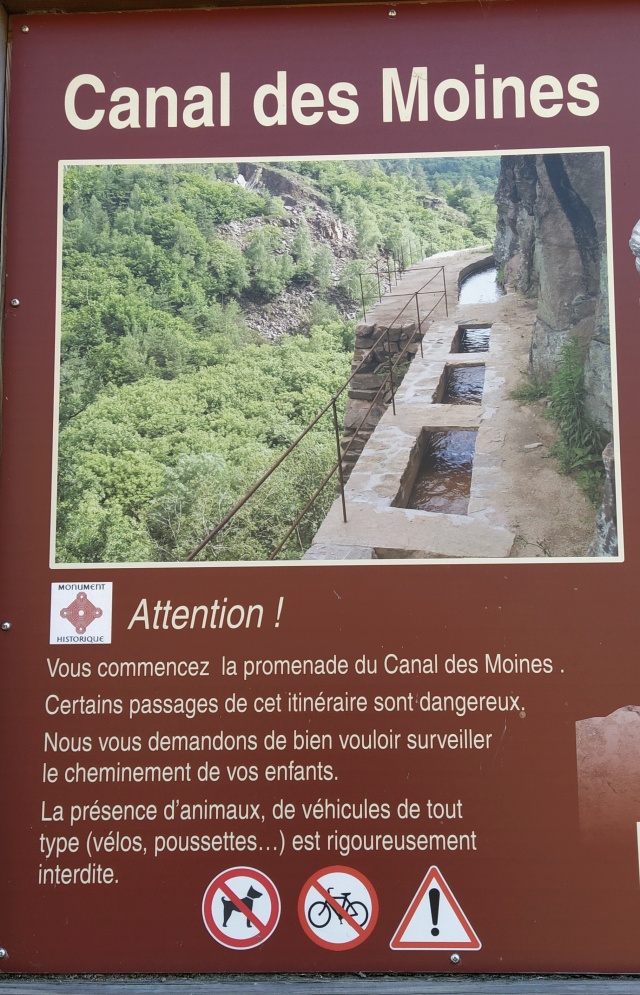 We had been warned.  The walk was now flat with the canal moving gently on our left and a fabulous view of the thickly wooded hills on our right, between the trees growing on a very steep slope.  Not a place to bring the grandson…yet! 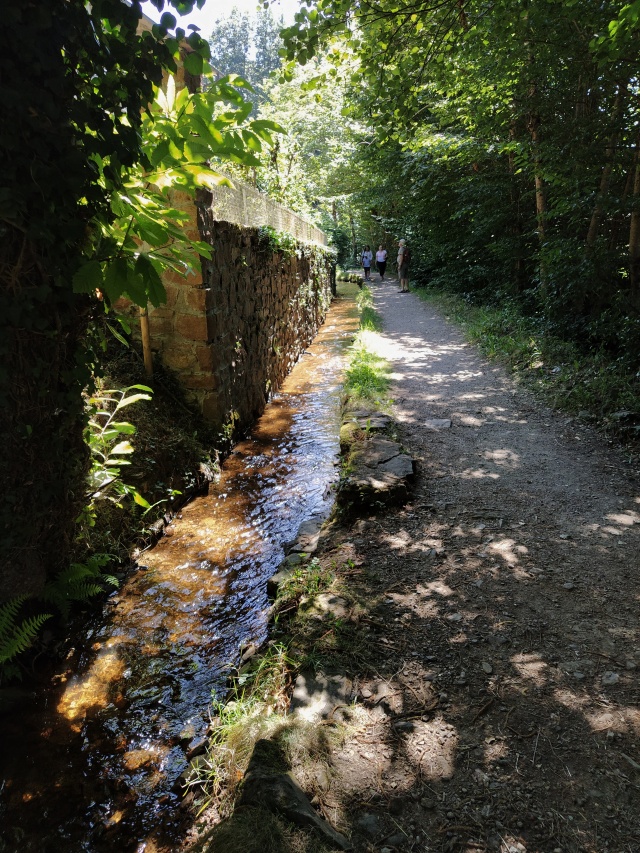 Soon we were out in the sunshine with the rockface now on our left and an even more dangerous looking drop on our right.  The praise in all the publicity for the rigorous hard work of the monks was becoming apparent the further we walked. 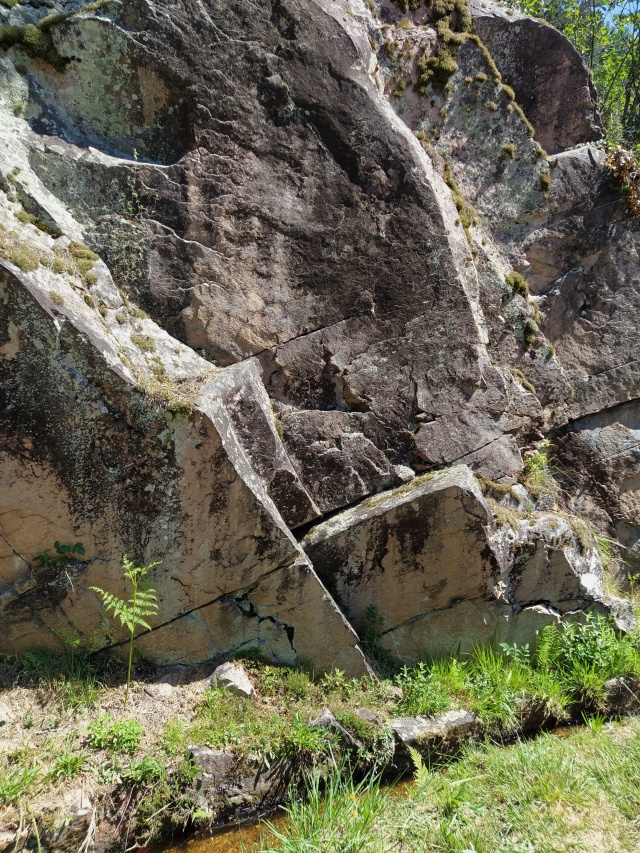 The path is well maintained and easy to follow.  There are a few places where you have to clamber over a rocky outcrop but there are handrails to hang on to.  Of course, out came the hand gel after each rail grab and I was very concerned by a chap I nicknamed the heavy breather who persisted in stopping behind me to catch his breath.  I moved quickly away and hoped my ridiculously big floppy sunhat was giving sufficient droplet protection! 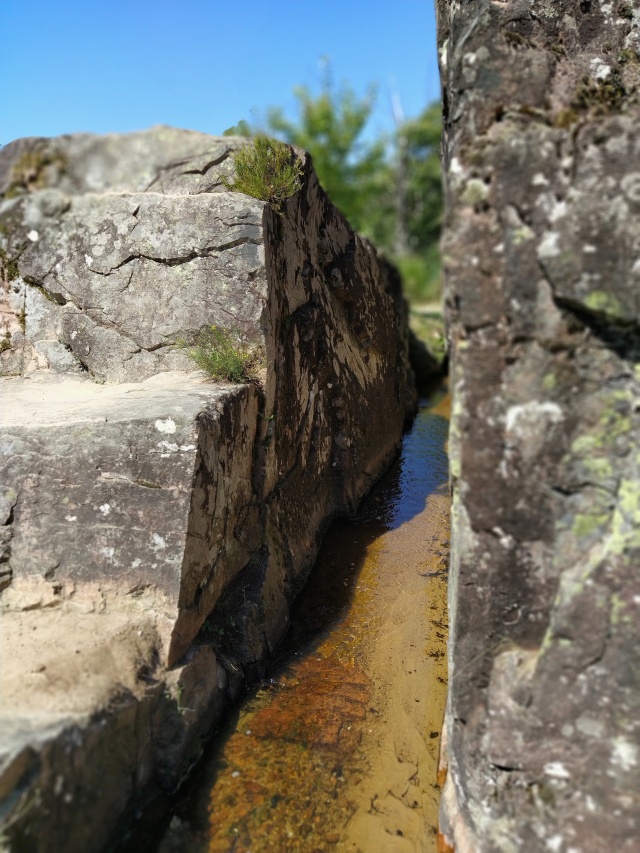 At one point there were metal hooks in the rockface and I remembered seeing a climbing logo on the map.  Abseiling too? 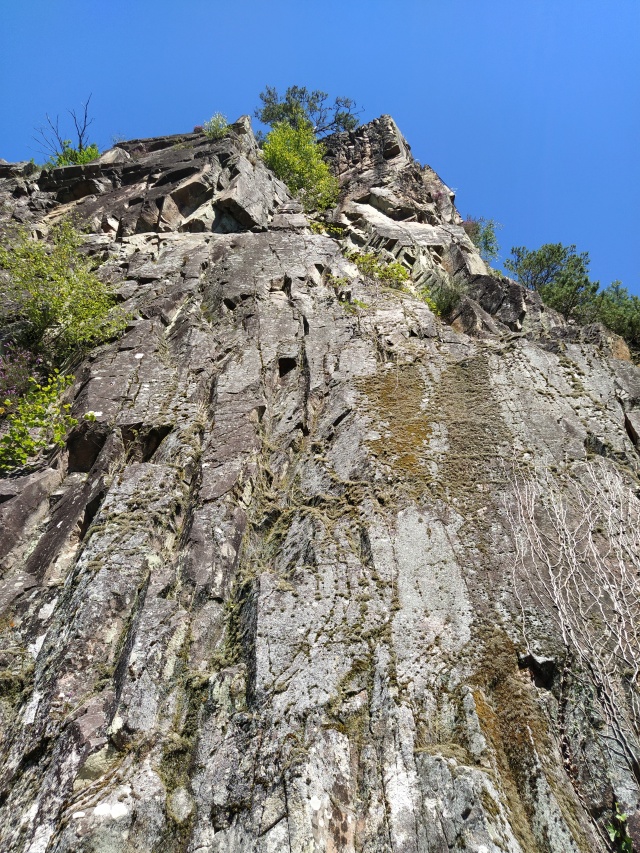 We carried on with the sound of the river now below us amongst the trees.  Finally, we caught sight of the water glistening as it rushed over the rocks. A little further on there was a path down to a wooden bridge over the torrent.  Some children were enjoying that! 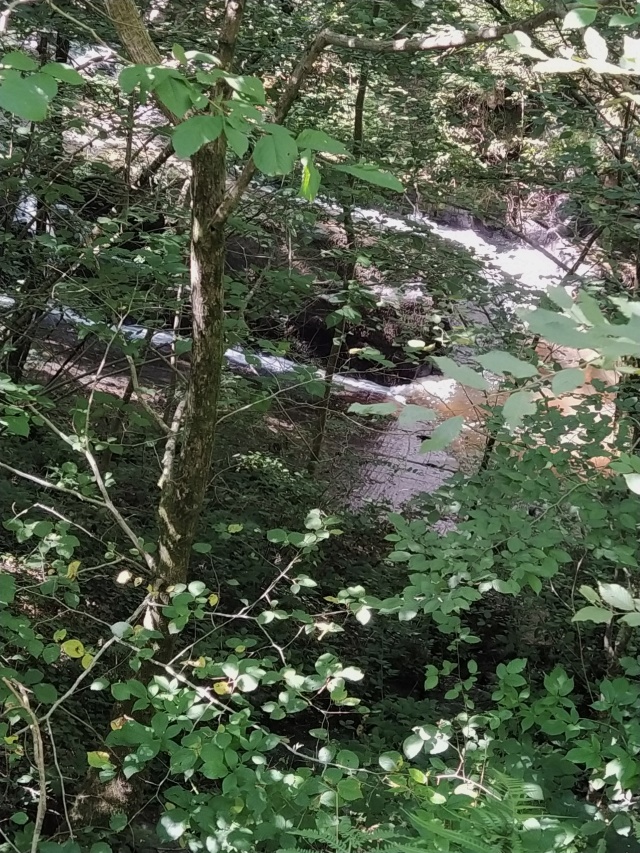 Now we were almost at the point where the canal joined the river.  There was a sluice gate set between the rocks and an anxious step over the flow took you across to a place where you could see the river coiroux cascading down a waterful deep under the trees. 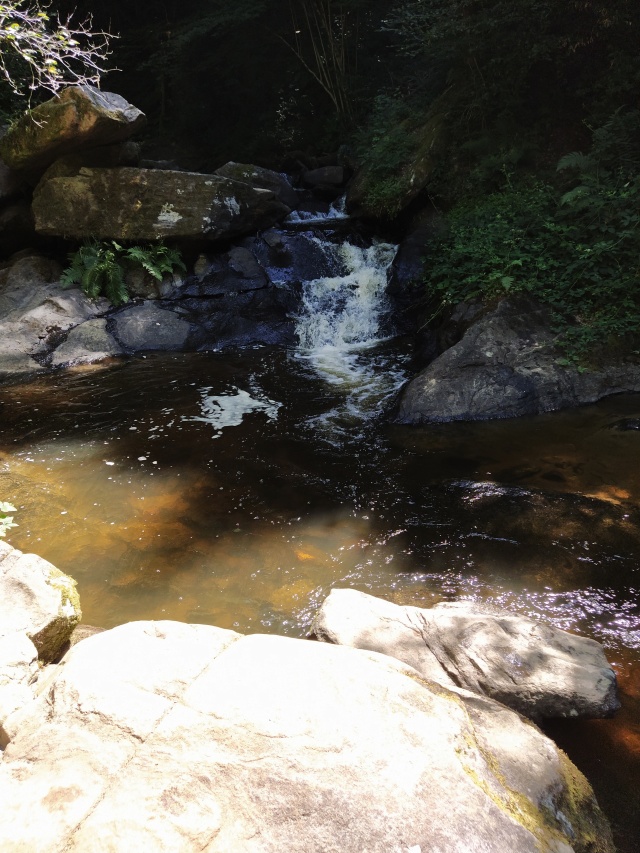 At this point we wondered whether to follow the footpath up to the calvaire and the point de vue.  There was a washed out yellow balise on a tree trunk but the path didn’t look very inviting as it curved its way up the deeply shaded hillside with many tree roots looking ready to trip over the unwary walker.   As we were not in walking boots we decided to give it a miss and return the only way possible…the way we had come. 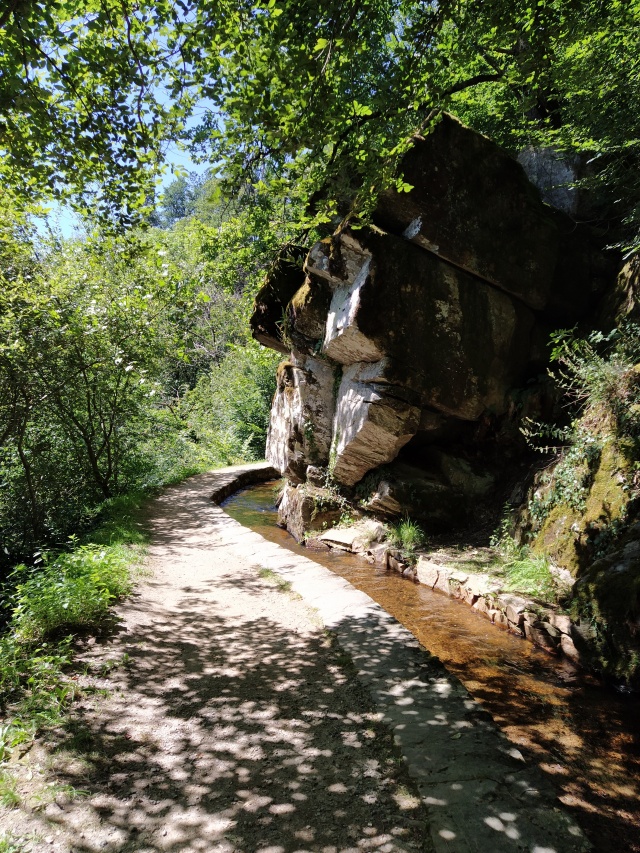 The return always seems much faster than the outward journey and, thankfully, I’d lost my heavy breathing shadow.  More photos, bien sur.  And time to take the one that is on all the postcards of this walk. 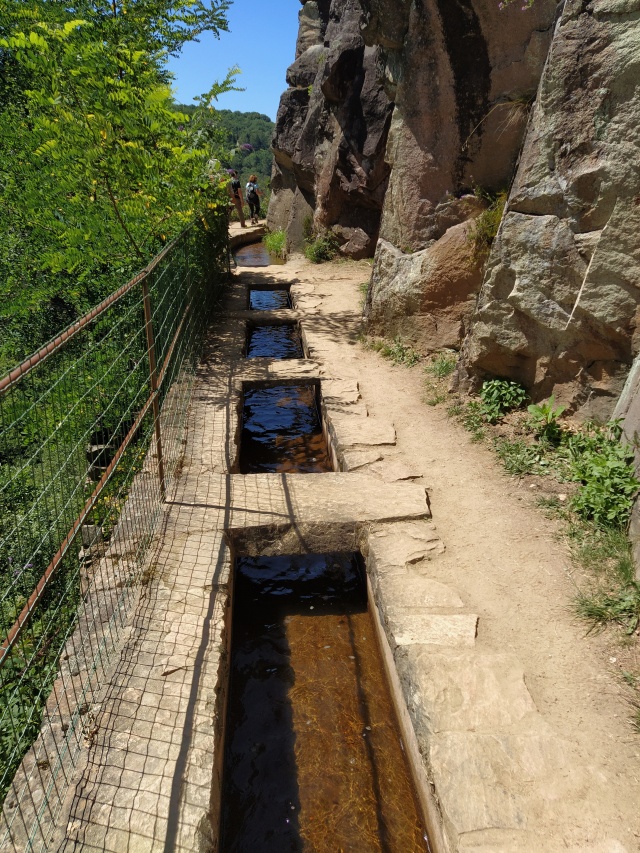 Is this the corbelling the publicity talks about? In which case we’re walking over the void!  We were blessed with fabulous weather and it was clear the holiday season was getting going.  Further picnics may need to be taken on randonnees rather than tourist hot spots as infection rates are already on the rise again.

Back at the car lots of hand gel and thoughts of coffee.  Luckily we were parked on the road we needed to take out of town.  I had spent ages on Google earth looking for likely picnic spots, preferably near water and had even thought we may end up in a layby, albiet pretty, with a former railway building on it, on our route home.  Finally I found a tiny etang and street view showed me it had a sign indicating its existence and google earth had followed the approach road as far as a big parking sign.  So, hopefully, a legitimate place to picnic.  Then the evening before the picnic I remembered that I had recently bought an ign map of the area.  There was ‘my’ etang and, oh joy, an aire de repos icon.

A short drive along a windy (aren’t they all) road with views of more wooded hills and valleys and then the sharp left turn for the etang des saules, the willows pond. 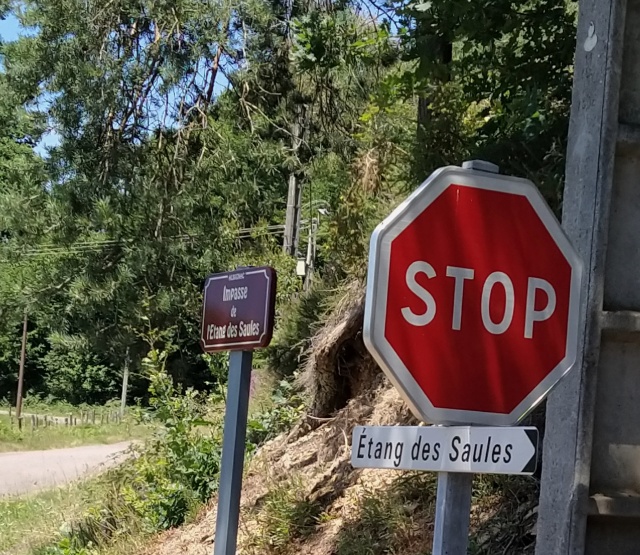 There was the carpark as expected with just two cars.  We parked in the shade overlooking the pond. 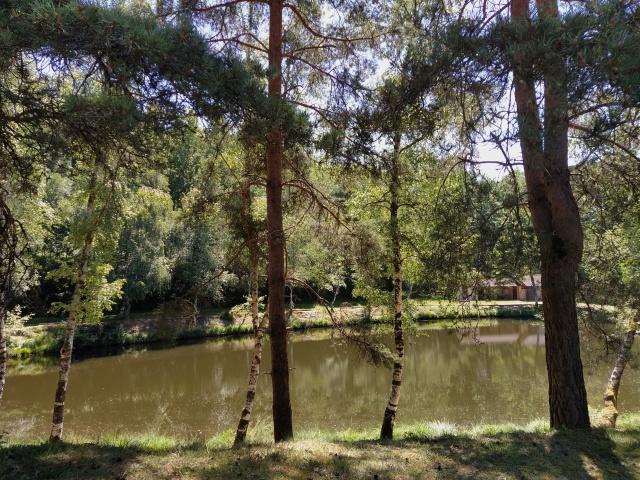 There were several rods around the pool and fishermen at both  ends.   We set up camp in the shade  above and where we wouldn’t disturb the fish.  We relaxed and watched the dragonflies and a lone duck, the only one to break the peace and quiet. 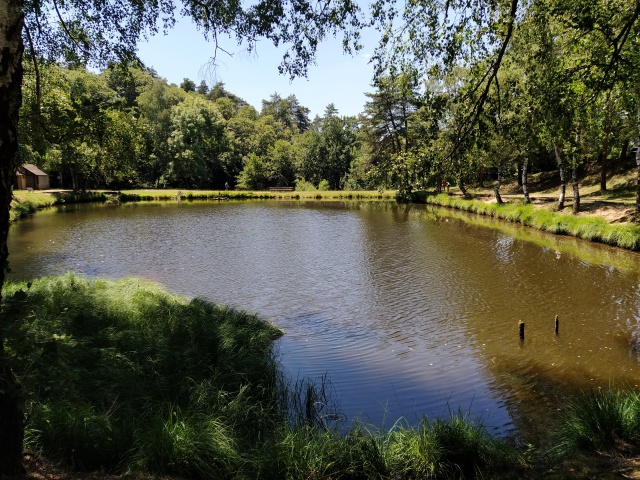 After lunch we wandered around the etang (I tried the toilets indicated on a sign but the door was locked!) and, of course, I chatted up one of the fishermen to find out what lived in the water. 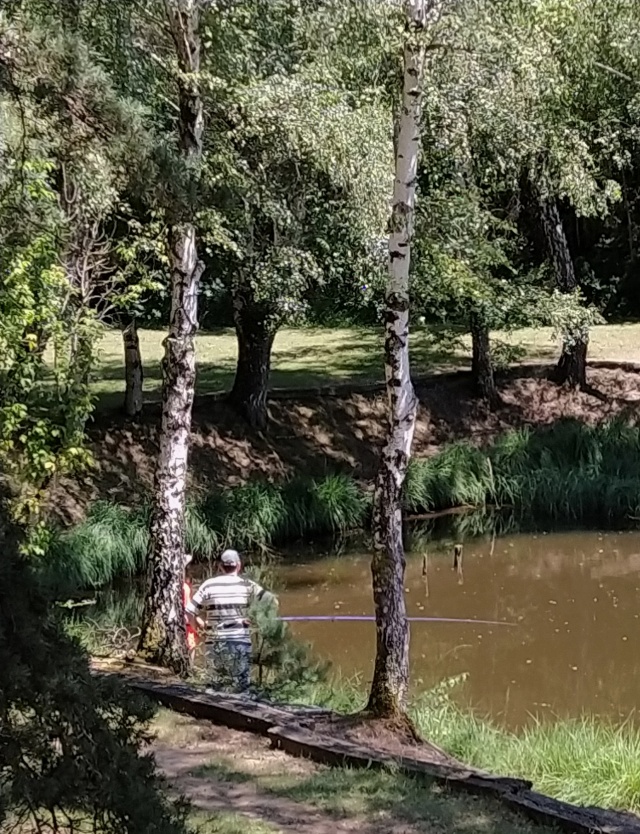 He told me carp and pike but you could only take one of each home with you.  Half-day and whole day permits could be bought at the mairie of the commune, no licence required.  He spoke a little English when he heard my accent and as we left told us to ‘stay in France, ignore the Brexit!’.  We intend too, we told him. 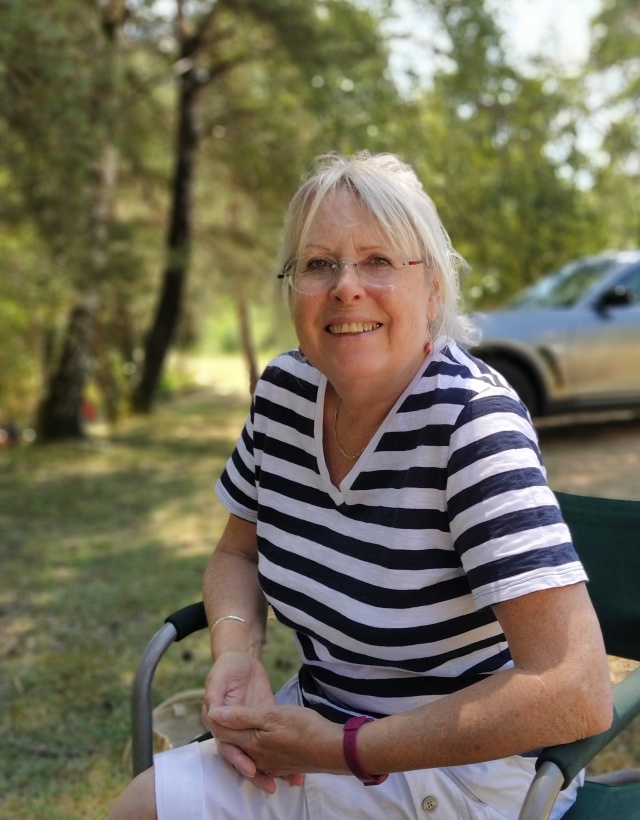 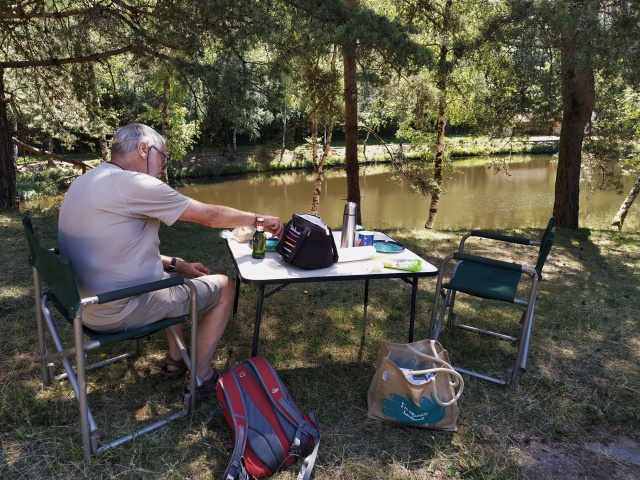 ‘i’m only the chauffeur’ and parking expert. (He didn’t like the other photo)