Posted on March 18, 2018 by lynnefrancophile

Birthdays. How they come around before you have time to get used to the last one. Age that is. I never get tired of a little birthday spoiling!

When I decided Amsterdam would be an interesting birthday venue I got googling and picked out which attractions I would like to visit and which ones to add on to placate the other half who finds museums and galleries hard going. Lists were drawn up, routes plotted, timings anticipated and likely lunch spots noted. Then the ticket buying online to complete the master plan. The other half always tells people he’s ”just the driver’. Personally I think he prefers it that way, less hassle and he can always blame me when it goes awry.

But it didn’t, so long as you don’t count my phone crashing onto the cobbled patio at the second museum, its face now resembling a drunken spider’s web. 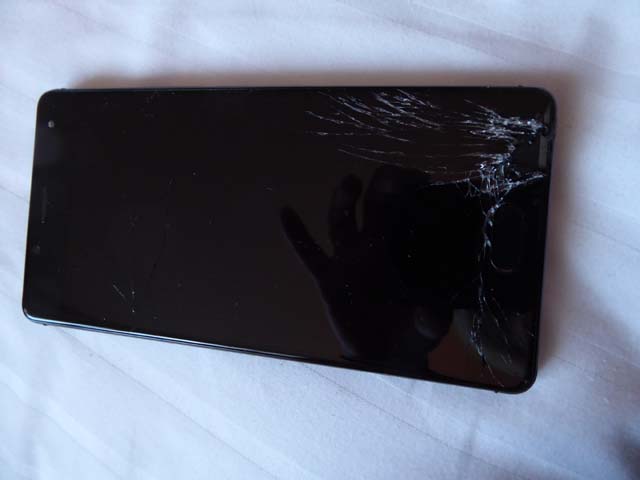 It had been bitterly cold as we walked to the bus stop. I had my scarf up over my nose as my face was in pain from the cutting wind. Happily a bus came as we arrived at the stop so into the warm without hanging about. At central station we hopped off, checking out our tickets like old hands and walked over the canal to find the tram. A tour group were already loading onto ”our’ boat. At nine in the morning, poor things. The boat hadn’t been that warm the other night. 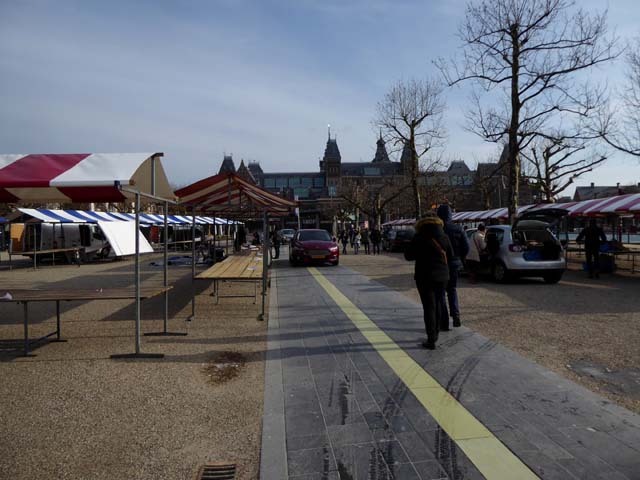 The tram took us to museumplein where the rijksmuseum loomed at me, reminding me I had voted not to visit, well, not this trip. My printouts worked their magic at the van gogh and we were into the warm again. We were early but that seemed not to matter so we were soon dodging around people glued to their audio guides washed up in shoals in front of certain paintings. 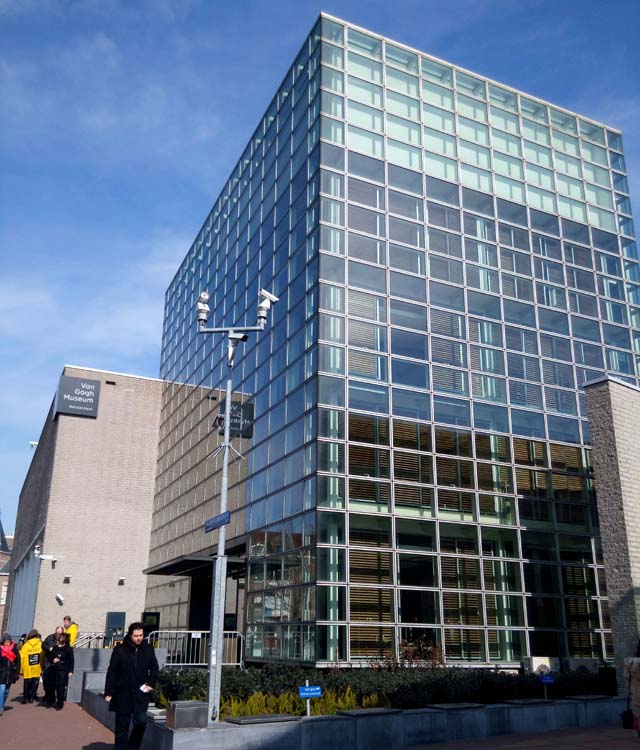 We worked our way up all three floors and I learnt several new things about Vincent. Also, that the museum doesn’t seem to own many of his most famous works. Private collections, Lou suggested. Or scattered around the world’s bigger museums?

After that it was lovely to sit in the museum cafe over a capuccino, bathed in bright sunshine and reading birthday messages from the family.

Van Gogh ticked off and coats collected from the cloakroom, we layered up again to face the glacial winds. The next gallery, the Moco, is very nearby and was quickly reached.

An old house with a maze of rooms which were busy with a very different demographic from that in Van Gogh. 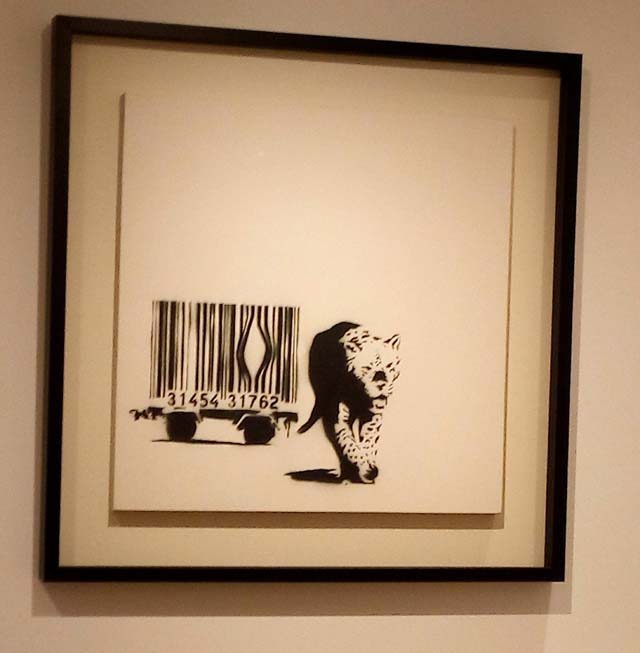 Roy Lichtenstein was in the basement and the poor relation in terms of visitors. He was always an acquired taste; maybe but colourful!

(i am happy with my watch…this birthday!)

Leaving there via the cobbled patio it was as i tried to organise myself into my layers that the phone went tumbling. Bum! Muttering to my foolish self we walked towards the voldenpark as a seafood restaurant i had googled and noted was in that general direction. Turning a corner I noticed Prada and then Louis Vuitton, then other purveyors of expensive goods. 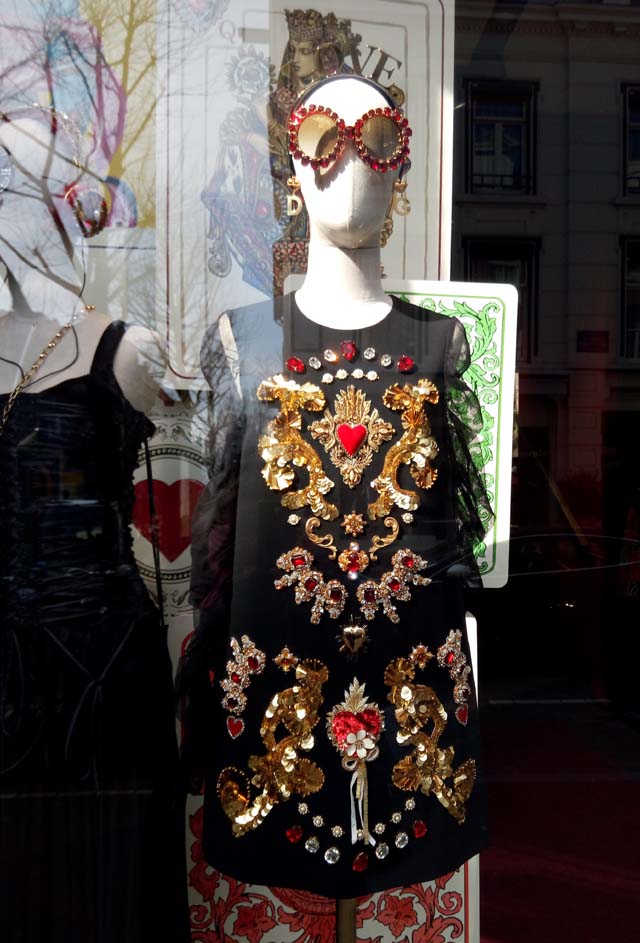 The Bond Street of Amsterdam we wondered? Turning into the next road towards the park but with no clear idea where the restaurant might be we were delighted to find ourselves in front of it. And they had a table free. Up on high stools but no matter.

The menu had us salivating but cold fruits de mer was not what we wanted on this cold day. So we decided on the two person platter called the ‘mixed grill’, a cornucopia of fish and shellfish. We passed on chips and shared a very good salad bowl. White wine from Sicily and I was loving the whole experience, even the bibs we agreed to wear. Memories of eating boullabaise in Marseille similarly attired! 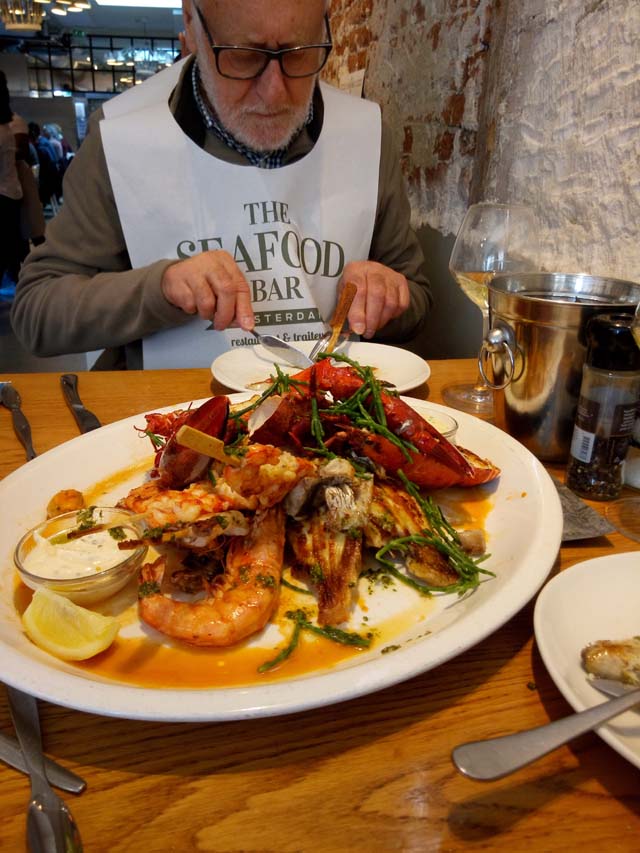 It was an effort to make ourselves leave and face the cold again but we did. This time it was to go back the way we had come and investigate the stalls that were being set up when we first arrived this morning. It appeared to be a craft fair and I was told it happens once a month. There were some pretty things but nothing I couldn’t live without.

We had some debate about how to reach the foam photography museum but thought we were headed in the right direction. We were surprised to see about eight mounted policemen ride by but then noticed a protest march passing the end of the street. We couldn’t see or hear much but a lot of police vans were following them and later we saw what Lou said was a van with water cannons on top. Maybe it will be in the news?

We got ourselves thoroughly lost and still don’t know where we walked. We spotted a tram going to central station so follow that tram!!

At the next tram stop there was a map and the canal we wanted not too far away. First some roadworks to negotiate (happening everywhere it seems) and trudged towards our goal.

A canalside house again with a mixture of old and modern features. The Jacob riis exhibition was fascinating but the more recent work left me confused. Photography being used in an abstract context just leaves me floundering. 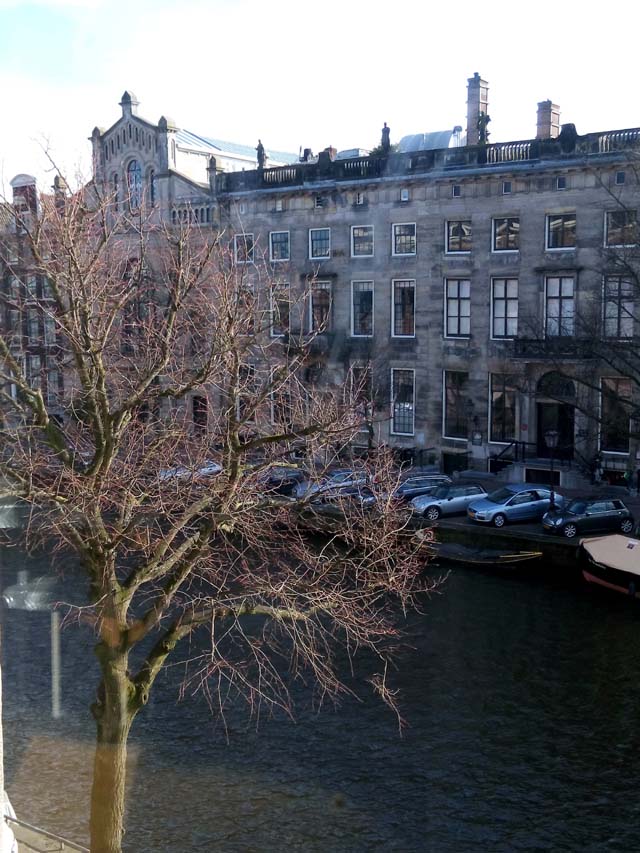 As at the Huis Marseille we twisted and turned up and down staircases and into tiny rooms glimpsing the secret gardens behind the houses.  but here theer were many modern design touches. 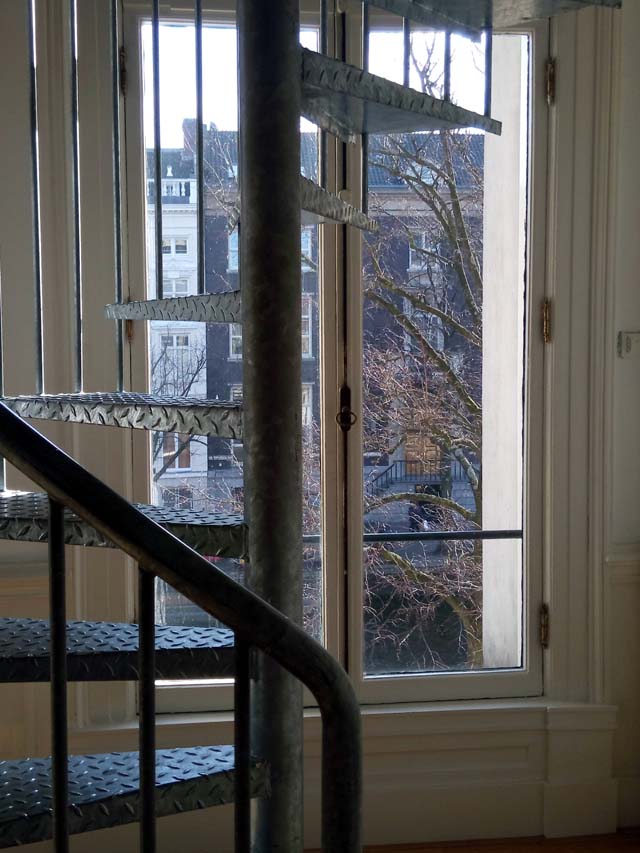 Having exhausted the photos and ourselves it was back down to the coats in the basement locker and out to find the tram ‘home’. Unlike last night we managed to get off the 22 bus at the right stop so were able to walk back with the wind behind us rather than battling through a windy tunnel. 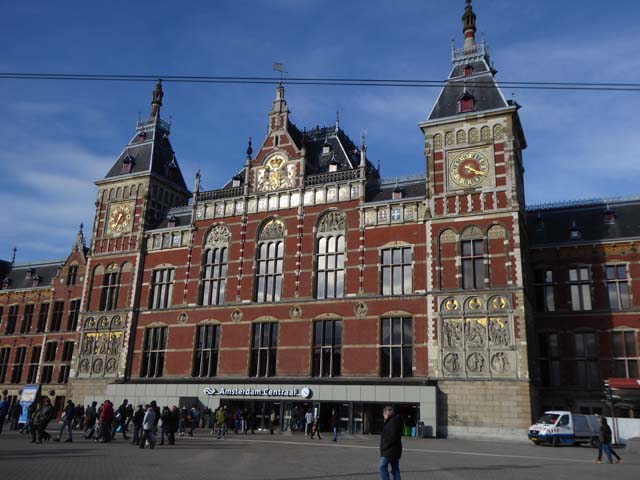 as we walked from the tram to our bus the station was illuminated by the evening sun and positively glowed!

Boots off and kettle on there was a tap at the door. Our cheerful waiter from the brasserie was outside bearing balloons, a birthday card, sweets, a bottle of red wine and two glasses…for my birthday!