Posted on September 25, 2016 by lynnefrancophile

all my ideas for outings having been exhausted it was up to lou to decide where we would go on our last day of hols.  he toyed with the idea of heading down to spain as the border is only just over an hour away from capestang but we wanted to visit the coast and the autoroute was too far inland and the coast road resembled knotted string on the map so we thought better of that idea.  lou spent breakfast and shower time checking out the map and came up with sete.  a quick google confirmed it was an interesting destination. situated on the eastern end of the etang de thau (where we had been the day before) with a hill above it and several canals through it.   it seemed like a good place to wander around and find a fishy lunch.

the weather was being very kind and apart from a downpour the previous morning that soon dried up we had had hot weather all week.  with the campsite a bit busier we had discovered that the tepid water in the showers had become positively boiling! some strange quirk of the waterheater we assumed.  so, after a good night’s sleep (maybe the vineyards don’t work saturday nights?) and a lovely hot shower i was ready to enjoy our last day.

we retraced our route of the previous day and arrived in sete before midday.  parking was going to be difficult, we decided, judging by the cars crammed into every space and the crowded pavements.  the underground car parks were a nono due to the topbox so, finally, we took a turning along the royal canal and hoped to find something.  amazingly, we did, albiet at the far end of the quay near the customs house.  here the moored fishing boats were much larger than their cousins at meze and had very formidable winches on their sterns. 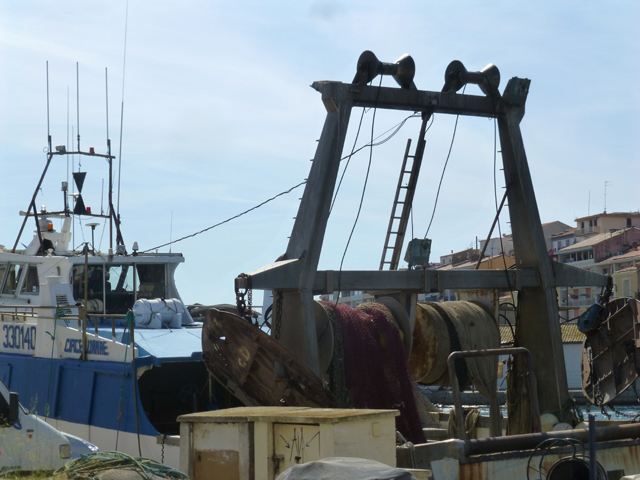 we walked back to ‘our’ bridge, hoping we would remember which direction to take for returning to the car.  from the bridge it was a splendid view of the canal in both directions.  i’d read that sete is called the venice of languedoc because of its canals.  having been to venice at the same time of year sete was winning hands down in the sunshine stakes.

canal royale looking west  (the car is somewhere down on the far left!) 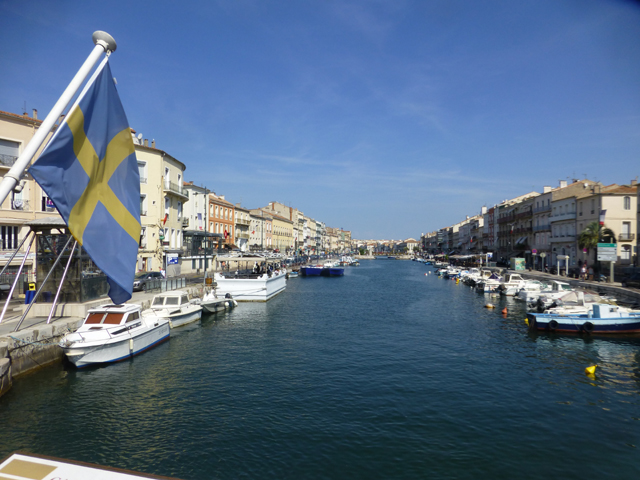 on the far side of the bridge the quay in both directions was lined with restaurants.  lou felt it would be very hot to eat at any of them.   i was keen to have my morning coffee so we followed the centre ville sign, ignoring the one for the tourist office that we didn’t believe would be open on a sunday, and found ourselves in a leafy square.   a convenient pavement full of cafe tables so i got my cappucinno, the prettiest i have ever been served, and lou had a cold beer.  we sat and enjoyed watching town life go on around us. 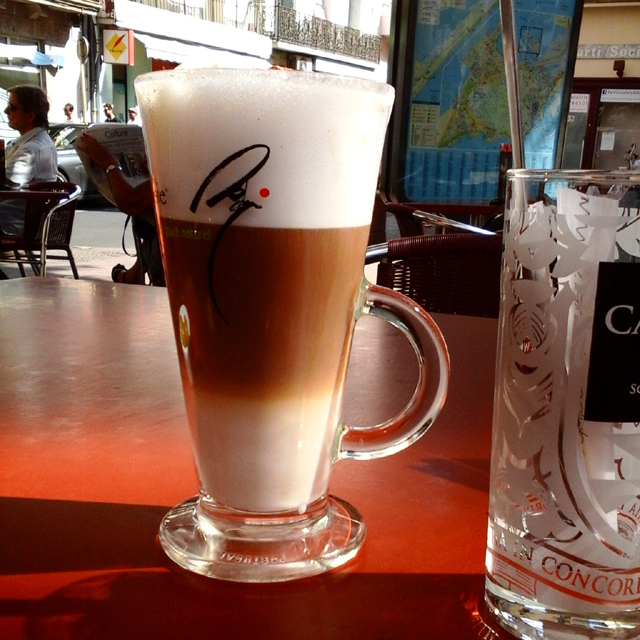 in the middle of the square there was a book market going on.  all the stall holders were sharing an apero so the stalls were partially abandonned which meant i could poke around and not be bothered by an anxious bookseller.  spotting a pile of magazines entitled cliche with a black and white photo on the cover i thought i had happened upon an old photo mag.  flicking it open randomly i found myself face to face with the splayed legs of a naked lady, tastefully posed but not on a sunday morning!   i put it back gently, pretending that i had known all along what it contained.  oops!  i should have spotted the book next to it was entitled nudes rather than thinking it was related to the art books to the right! 🙂    (googling ‘cliche’later, i find it is now the name of an american based lifestyle and fashion mag. )

further on i found a lovely old french school book. i have a weakness for these so had to buy it.. the stall owner came over, still clutching his apero and took my eight euros.   we discussed the hot weather and the noisy vendange. 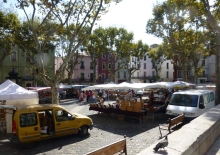 i asked when the tourist season finishes in that area and he said a storm was forecaast for the following wednesday and everyone would disappear!   he recommended we go and find les halles as we would ‘manger bien’.  so we did…and we did. 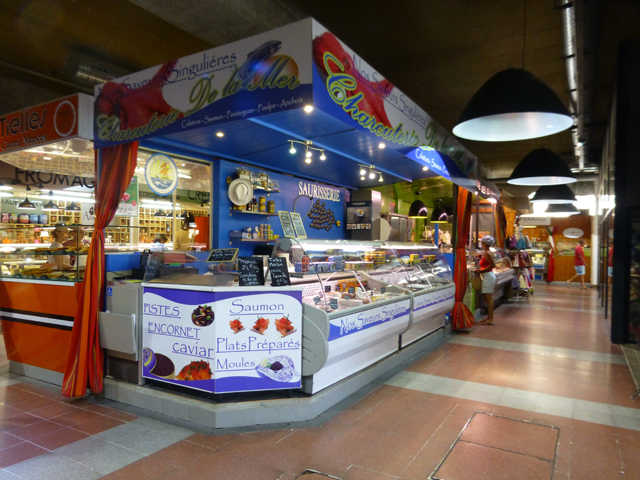 en route for les halles i found a librarie open and was able to finally buy the map we had badly needed on our cycle.  better late than never!  les halles is a modern building and airconditioned so it was a relief to wander amongst the stalls and look for a good place to eat.  we were spoiled for choice but chose one with natty little tables in front of its counter. 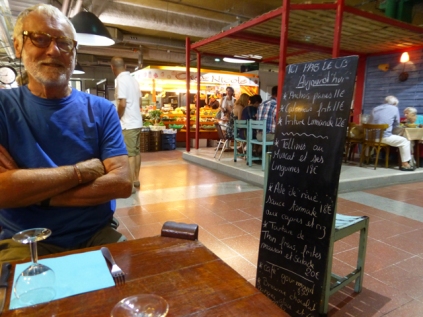 a blackboard was eventually placed in front of us and our mouths watered.  we opted for breadcrumberd anchovies for me and friture limande for lou.  i didn’t take on board the word limande and was thinking a bowl of small fried fish but when it arrived it was four small fish, a relative of the sole the waiter told us.  we shared our fishy feast and swilled down some white wine while watching the comings and goings of the market.   a perfect people watching spot! 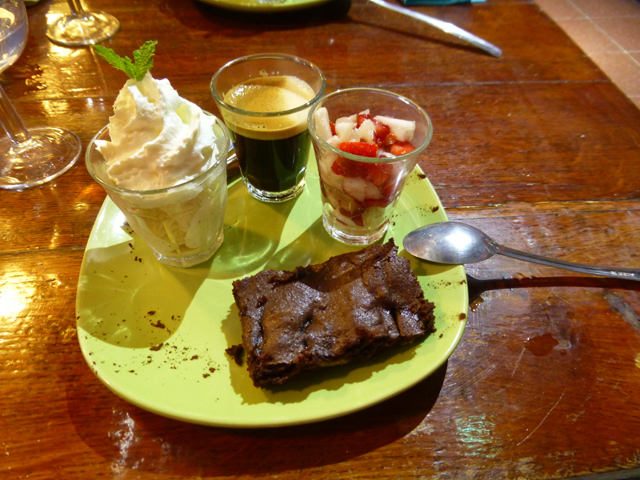 we finished off with cafe gourmand which really filled any last small space we might have had left.  leaving les halles we realised what a good recommendation it had been as the heat really hit us as we emerged.

so it was a desultory post lunch walk. we ambled along the quay, taking photographs, and rebuffed the many offers of late lunch from the eager waiters. 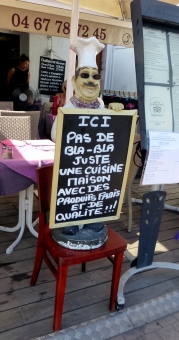 we found the car and searching for a way home without tracing too many steps took the road out of sete that runs along between the med. and the lagoon.  i thought this would offer splendid views of the sea and the etang but no!  what it did offer was a view of the extensive car park for the ‘plage’.   the car park queues finished any ideas of stopping for a paddle and a snooze.   at the far end we came through agde and crossed over the herault and the canal du midi where it empties out.  i had hoped that we could find the wonderful aqueduct that carries the canal over the orb river at beziers but even with our lovely new map it was hopeless.  too many roads and not enough signs.

so back to capestang and after a last apero at la cafe de la paix, a last meal in le grille.  it was meant to be a small one but my plateau of charcuterie also served the neighbouring table of four as an entree.  i was too embarrassed to ask for a doggy bag but should have done.  it would have made sandwiches for the next week!