Posted on September 14, 2015 by lynnefrancophile

Well, what a day. Still trying to get my head around it. So many sights, so many emotions. Lou says he is ‘just the chauffeur’ on these trips but what a chauffeur!  The man has nerves of steel while i turn into a squeaking wreck beside him! leaving kotor i persuaded him to ignore the gps and take the road to cetinje.

In the guide book there was a mouth watering description of the old mule track it was based on and called the ladder of cattori, the italian name for kotor. It climbed and twisted and we stopped for pictures thinking that was it. But, oh no, it wasn’t! It climbed and turned (around 26 in all, they were numbered but we lost count!) and became narrower and narrower. The view widened and widened until we could see most of the boka bay and over the mountains to the adriatic. Of course, umpteen cars, campers and vans lay in wait to try and pass us at the hairiest places. 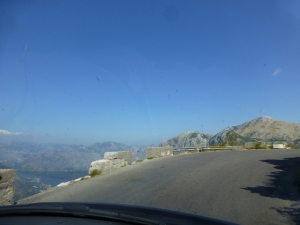 Lou edged forward and i tried not to look at the drop beside me. We drove over the col and into a stunning, (sorry, running out of adjectives) mountainous landscape that stretched away to the north.

Then a swoop down into a fertile and flat plain with little ice cream coloured houses and fields full of violet autumn crocus. 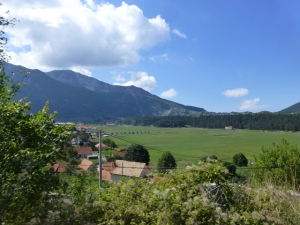 Swallows darted around the car and at one point goats posed picturesquely on a rocky bluff waiting for me and my lens.

Lou stopped grumbling about the extra time this road had taken and agreed the views were worth it.

Towards the albanian border the landscape became much flatter as we approached the edge of the skoder lake and the houses and buildings became scruffier. My apprehension was mounting but i tried to shake it off. We stopped for coffee and soon after, suddenly found ourselves at the border point. 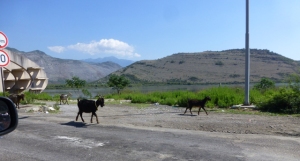 At the guichet the guard asked something we didn’t understand. Lou said we were english, sorry. The young man turned quite nasty and told us ‘i speak good english, document car!’. Lou quickly handed the carte grise across and apologised. The guy whacked a stamp into lou’s passport and glowered as he waved us on. Oh, the foreboding feeling as we stopped at his albanian counterpart. Minutes passed as each document was scrutinised and then we were through. I jotted down our arrival in albania and realised my hand was shaking! We drove towards shkoder on a reasonable road surface and got accustomed to the rapid changes in speed limits. But as we tried to drive through shkoder the full albanian driving experience lay in wait for us. Forget potholes, did those in romania. But try coping with murderous overtaking, cyclists and mopeds being ridden towards you on YOUR side of the road, cyclists zipping out of side roads and parked cars and crossing right under your front wheels. A woman walked with her baby in a pram across the middle of a city centre roundabout! Things didn’t improve out of town.

On a supposed autoroute, pedestrians ambled towards you, buses stopped abruptly to pick up passengers and tractors slowly pulled heavily laden trailors. Unseen cars ahead made manoeuvres that caused the cars you could see stop dead so lou was constantly standing on his brakes. 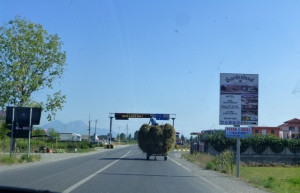 When we arrived at tirana we managed to find the hotel with the aid of my photocopied map, without the useless gps and without shouting at each other. I think we were both too shellshocked. On arrival, a cold beer for ‘just the chauffeur’, my hero! xx

4 Responses to welcome to albania