We didn’t go to Marcilhac sur Cele the next time. We did something completely different. 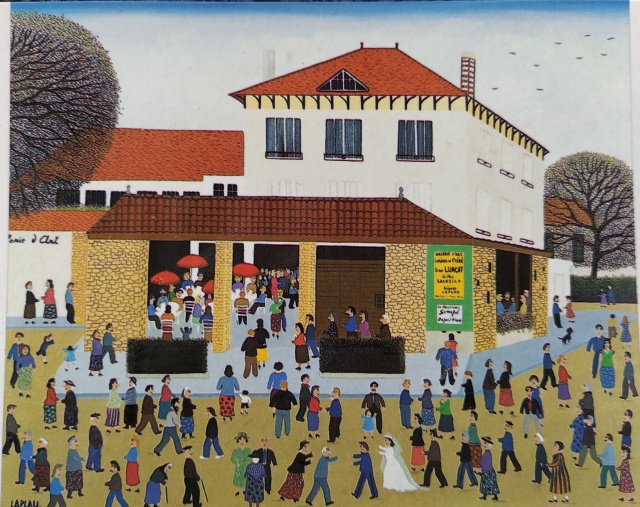 Unbeknown to us at the time the tiny elderly couple who came out from behind the scenes when we walked in, switched on lights and watched us suspiciously as we wandered around had opened the casino back in 1945 as a bar and music venue. It soon became famous and had been referred to as the Olympia of the Lot, as a comparison with the more well known concert hall in Paris.  We knew none of this and looked at the wierd and wonderful collection of art works by Jean Lurcat, a famous tapestry maker and resistance radio worker during the last war working out of his nearby chateau at St Laurent les tours and the modern, more gentle water colours of Gilles Sacksick.

The black and white photographs of a chap called Robert Doisneau took our eye, especially as it is Lou’s favourite medium.  We pondered the link with our local social centre called after him.  Over the years we have seen several exhibitions in St Cere and collected quite a few books of his work. Exploring the history of the owners of the casino they had been the centre of a coterie of artists, photographers and musicians who exhibited and played at the bar.  It was Jean Lurcat who encouraged them to include an art gallery (for his work, bien sur) in 1947 and after Doisneau interviewed Lurcat for the magazine le point, he too became part of the St Cere scene.

All of which brings me to our next destination.  Sadly the casino is no more. The elderly couple passed on, both surviving to a great age and, despite promises that the casino would continue albiet in a reduced form, not a lot has happened in recent years and it remains closed.

But, I discovered another place in the region connected to Doisneau.  Although not from this area he enjoyed taking his holidays here with his wife and friends.  A photograph of them waiting on the platform of the station at Carlux became an iconic image due to being taken in the early years of paid holidays and, more importantly, the last summer before world war two began.

I had googled earthed (my favourite form of stalking) a few years back and the station looked forlorn and as if it was about to be demolished.  Now, however, Google revealed it to be very smart and calling itself La gare Robert Doisneau, a complex of the tourist office, a gallery dedicated to Doisneau and a cafe which had opened in 2018.  Plenty of parking and only an hour from home. Bingo! 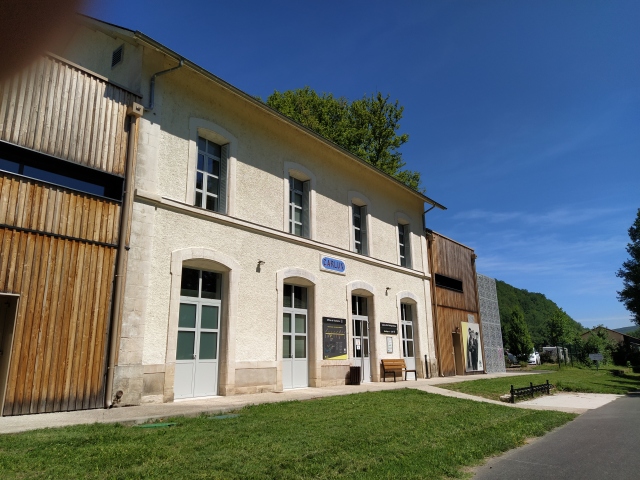 The railway track is now a voie verte, a mainly cycling route along part of the Dordogne valley.  We chose a sunny day and ‘only the chauffeur’ braved the twisty road to Souillac he doesn’t like to drive.  We were equipped with masks and took a picnic as I still didn’t (and don’t) feel safe eating out although bars and cafes are once again open.

The two galleries devoted to Doisneau were interesting for explaining about his life and connection with our region but the photos were mainly holiday snaps.  The girl on the tourist office/gallery desk seemed unaware that there is a big Doisneau exhibition down in Bram near Carcassonne at the moment.  It has been extended until September due to confinement so we still hope to get to it, fingers crossed.

There is a third gallery used for temporary exhibitions which we shuffled around but weren’t very impressed with.  Outside the sun shone down and although there was a grassy carpark beyond the tarmac one it didn’t offer any shade so we decided to go and look for some.

Malheursement, the spot I had picked because Google showed a sign saying aire de repos had been taken over by a private canoe company and the shady riverside was roped off.  So back to the main road to hunt for a picnic place. From my internet searching I knew it was going to be hard.  This road is busy in summer and is more about moving tourists from one destination to the next rather than letting them dally.  We saw one possibility and after a fruitless search further on turned back.  A camper was parked up under the trees but there were two picnic tables available. Ultimately we set up our own in the best shady position. 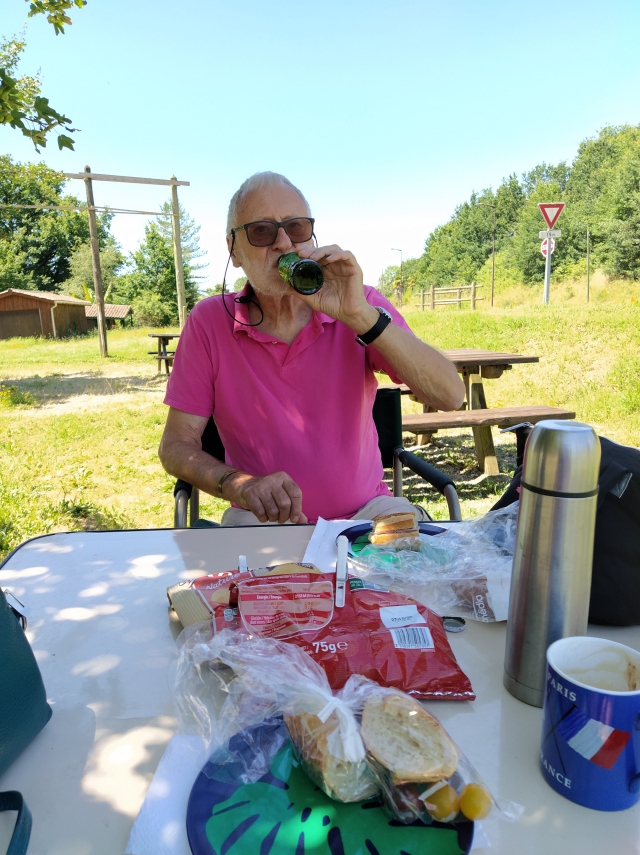 We found ourselves eating next to the voie verte where it crossed the main drag and I think there was more traffic along that than on the road.  All styles of bikes and riders.  It gave me a real sense of the holidays having started despite schools still theoretically being open.  We watched the world go by, on two wheels and four; enjoyed the butterflies and birdsong and the view of a village church spire.

There were even some poppies! 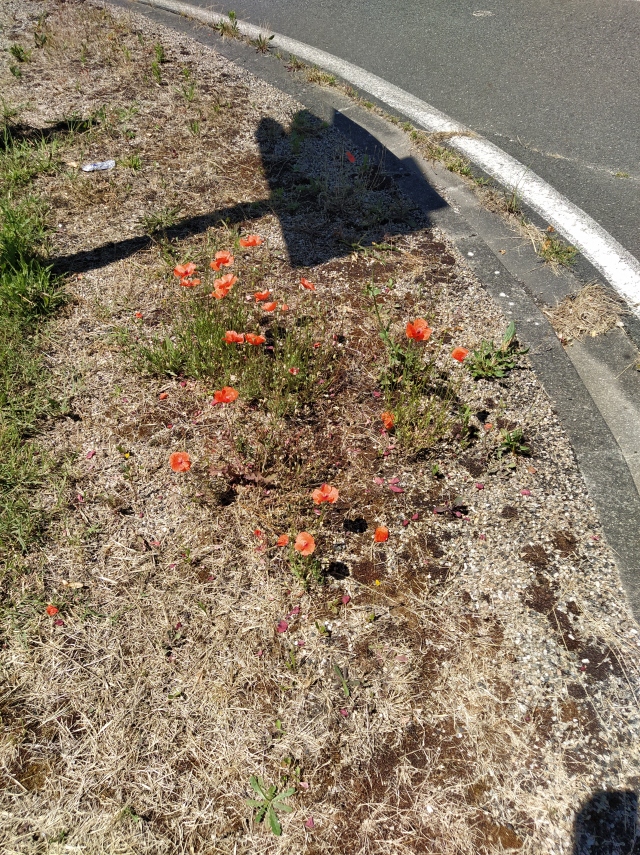 3 Responses to Next time…