Posted on February 25, 2020 by lynnefrancophile

The usual faff – sandwich buying and new boots for Lou before the pretty drive to lac de guery (once you leave le mont dore behind).  The car park wasn’t that full but families were arriving all the time. We got into our boots and set off for the Lac. I had been to the tourist office (part of said faff) to ask for the brochure of balades familial but she didn’t have it and said it was easy, just look for the papillon jaune, yellow butterfly, and follow them ‘autour du Lac’, words that would come back to haunt me later.

It was lovely to be walking again in the sunshine and an easier walk in view after yesterday with all the climbing (!). The lake sparkled in the sunshine and an excited child ahead reminded us of Kai and his chatter. The pine trees smelled lovely in the warmth and I noticed pussy willows beginning to burst. After a short walk we noticed an information board to our left telling us to look out for woodpeckers and the path also moving away from the lakeside and up into a beech wood.  And up. And up. 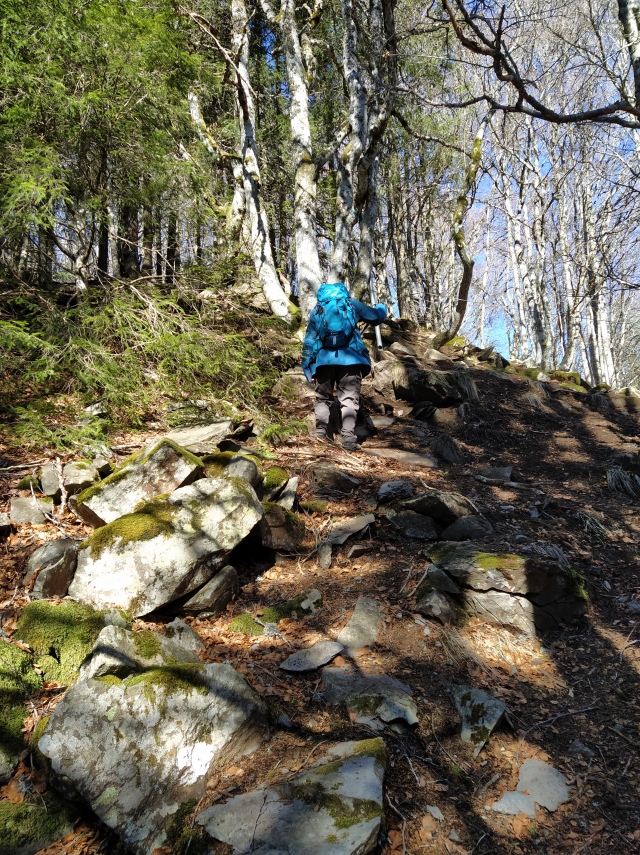 Eventually we were climbing up a steep and rocky slope, very glad we had sticks to use against the possibility of plunging back down. We looked around for the yellow butterfly and there it always was, painted on a tree up an impossibly  steep, and to us, treacherous slope. On came all the family groups plus others descending. There was the roar of a stream to our left and finally we realised we were being led up to a viewpoint of a thunderous waterfall. We had actually seen it just before from another angle across some vicious tumbled rocks that a couple of teen-agers skipped across for a closer look! 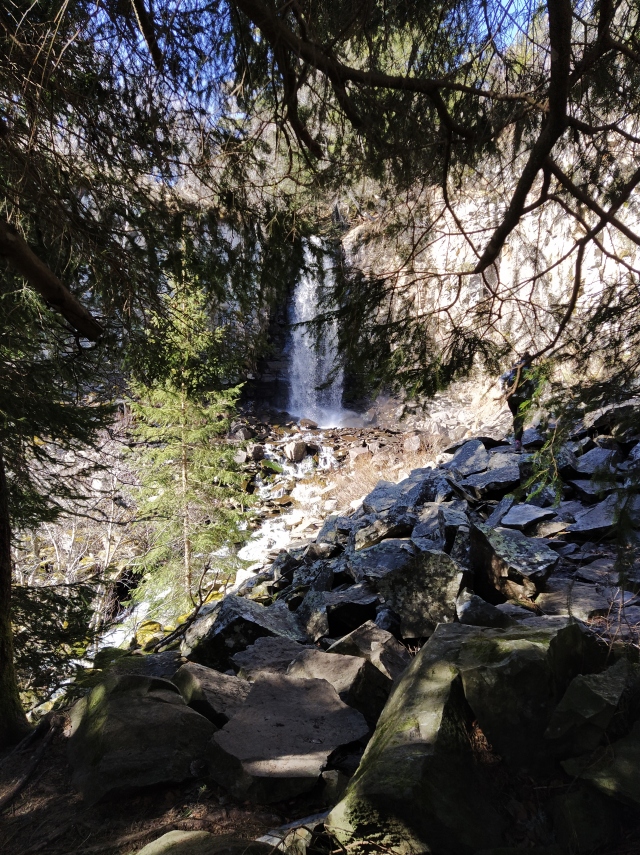 After that excitement the path levelled off a little and we felt somewhat relieved but confused as to the direction it was taking us. Finally we arrived at a gate and passed into a meadow. The family behind us branched off to the right but then settled down to a picnic.

We soldiered on alone glad of the sunshine and soft grass to walk on. But on and on away from the lake that we could no longer see. Eventually, convinced we had somehow got ourselves onto the wrong path despite that flaming butterfly we turned back. That meant back down the horrendous slope. This time we followed a rope trail down over the rocks and roots but still not easy and still scary. Down through the beech wood and back to the lakeside we went.

Looking along the lake edge away from us we found two plank bridges and then an extremely muddy and shadowed steep rise beyond. No way, we both decided. Back to our starting point and regroup!

At the log cabin Lou bought himself a beer in the boutique (no cold ones at the tiny food counter) and I got myself a cappuccino from the machine. 50 centimes, a steal. Outside there was an empty picnic table so we ate our lunch. It was half past twelve, we’d walked (!) for over an hour and needed the rest. Squinting at the map I could see that the so called sentier de decouverte, balisee with that dratted papillon, was where we had been walking and would have eventually turned sharp right and brought us back to where we were sitting, presumably without any heart stopping slopes to traverse. At no other point apart from the beginning did it go ‘autour du lac’.  Rtfm, our boys would say but for manual substitute map!

After a while Lou said he was ready to walk again and why not follow the track that said ‘ferme de puy may’ 2km and maybe the buvette signposted ‘1 hour’ maybe one and the same.  Why didn’t I look at the map? Why was I so trusting? So off we went along a broad track that is usually the start of the ski de fond at this time of year if snowy.  Up we walked – yes, up again. The path split and we went right hoping it was the way forward to somewhere or other.

We found ice on the track and some snow at the sides and several walkers going in our direction or not. The pine trees gave way to open grassland. The redundant signs for skiing pistes were a sad reminder that we shouldn’t be able to do this at this time of year but were giving us a taste of what summer walking would be like. Each time we visit la bourboule we tell ourselves we ought to come up in the summer!

The sun went on shining out of a clear blue sky but the wind came up and got stronger and stronger. I was glad I had brought my woolly hat and stuck my hood up over it in the end.

And still the track went on and up with dots in the distance becoming returning (?) walkers or cyclists. We kept telling ourselves that perhaps around the next fold of land we would see something resembling a building. But no, just mountain tops in the distance and rising small hills around us.

At last a building in the distance and a cattle grid across the track. Soon a sign announced the ferme de puy may and the height we were at. 1398 metres. My calves felt most of them. 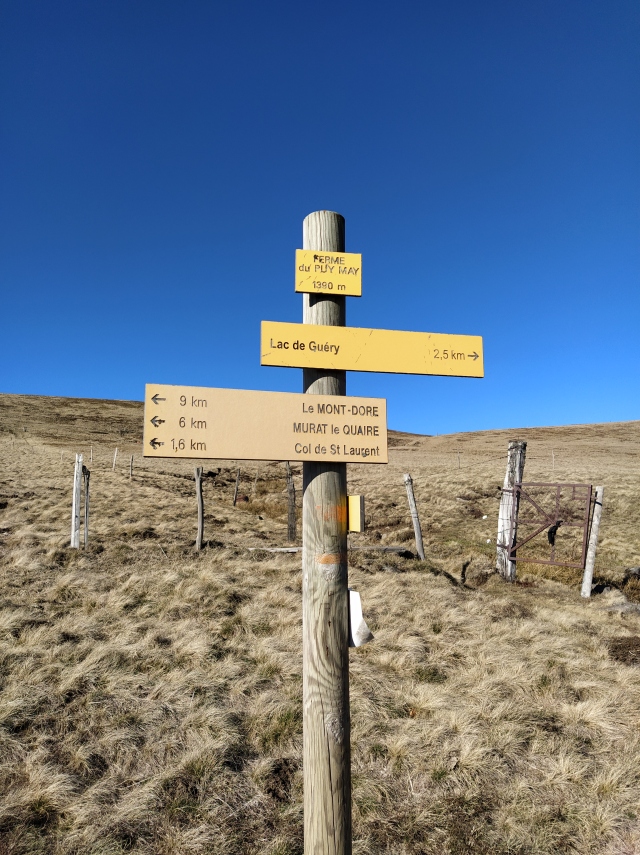 The farm turned out to be a ruin with evidence that maybe in the summer some sort of buvette parks up there. For now another sign told us the buvette was a further two kilometres.  Decision time. Walk another two kilometres with the slight possibility of a sit down and hot drink or turn for home?

We turned for home although on a different day and in different circumstances we thought we might have gone for it. So now it was all downhill, gentle but down. The wind still blew and when a couple with two small girls, grand daughters? walked with us for a bit I wished the girls had some nice warm hats on! 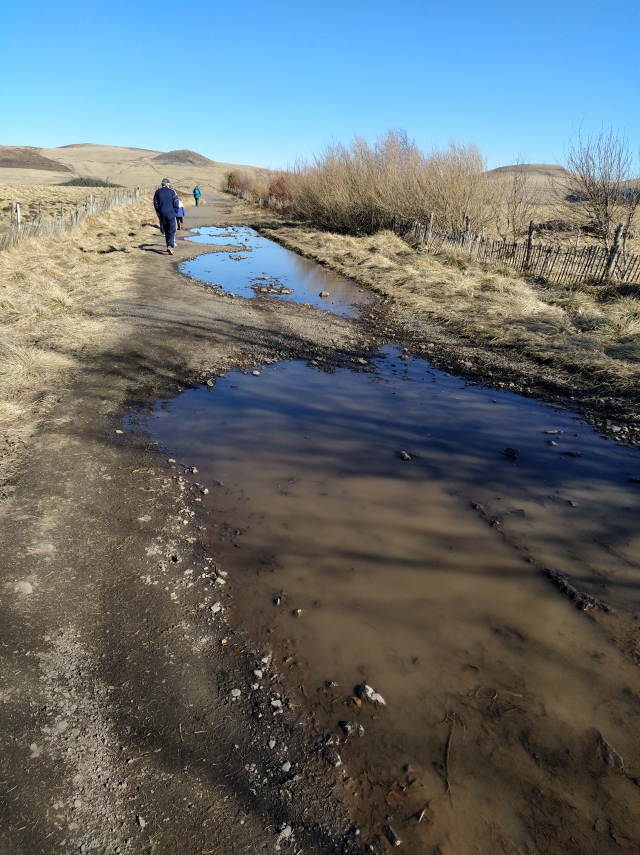 Some cyclists whizzed past on some odd looking bikes we had seen for hire at the log cabin. No pedals but some sort of power output. Getting back there ourselves it was choc and fizzy drink from the machine and the bliss of taking off the boots.  Looking at the map – finally –  I could see we had been headed towards the banne d’ordanche. A decent circuit if you gave over the day to it…and knew properly  where you were going!

So back to the Aviation hotel, so named because in the thirties, the Banne was famous for the gliding that took place there with the aviators staying at our hotel. Nowadays it is still a favourite place for model aircraft flying.

As it was his birthday we, I, had booked the table du trappeur, an intimate little restaurant with lots of wood and old skiing memorabilia scattered about where we had enjoyed eating in the past. The chap had said it would be second service and I was convinced he said eight fifteen. In fact he gave me the book to write  my name and number in and I thought I wrote it against 8.15. But when we got there at ten past he said he wasn’t ready, could we come back in a bit. So we walked up and down and presented ourselves ten minutes later. It then was  could we wait twenty minutes? I looked aghast and he told me I had booked for 9.15, The second service.  Bum! We couldn’t wait, we were hungry.

The birthday boy was very kind about it and we set off to try and find  a restaurant that would still accept us. The street was empty and the other places looked full. Normally at this time of year service finishes fairly early. Lou had looked at a menu board outside one place and had commented on the potee d’auvergnate, a ribsticking monster of a mountain dish. We went in with some trepidation but we were welcomed and offered a choice of table.

Suffice to say, Lou got his potee but my steak was off so I settled for truffade which turned out to be much better than anticipated. For dessert Lou tried a verveine, ice cream soaked in eau de vie’. My poire royal, meant to be a  similar boozy concoction turned out to be a mistake by the waitress who gave me  a poire belle Helen. Just not your night smiled Lou.  Maps and menus – not my day!