Posted on September 2, 2016 by lynnefrancophile

we have tried to camp at trebes on previous occasions but always had something ‘come up’ to thwart us but this time we made it. lou had been meteo watching to find three good days (june was particularly wet and grey this year) so as soon as he gave the ok, we were off!

the camp site was almost full when we arrived in mid afternoon and we got the last pitch with electricity. just as well as the closeness of the river meant we needed the electric moz killers on full alert. there were a lot of camper vans and couples of a certain age mainly dutch.  along the back edge of the site were several cyclists with tiny tents and cycle kit drying on washing lines. 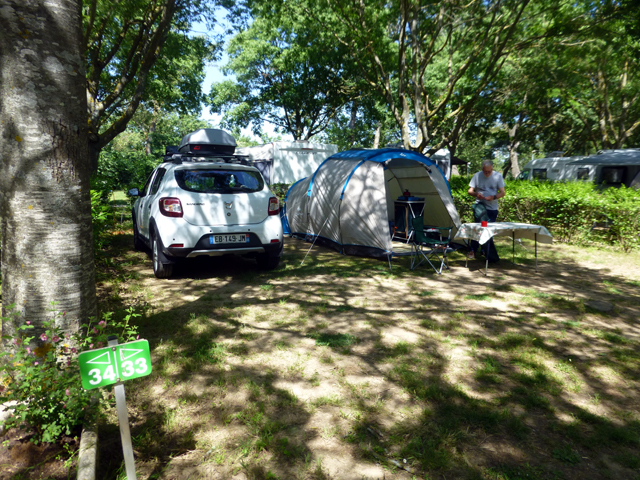 despite it being early in the season the campsite restaurant was open so we opted for a meal onsite. served by a cheerful and helpful waitress who turned out to be the daughter of the camp ‘gerant’.  our first night was disturbed by the campers next door who were getting drunker as the night went on until i stomped out and asked them to please be quieter. they were a bit huffy but did call it a night, finally! the second night it was a frenchman who complained but a lot earlier than i had. 🙂

i found it hard to sleep as i could hear the motorway droning for most of the night. oddly i didn’t hear it the second night so maybe the wind changed direction. but a cup of tea made by lou, breakfast under the micocoulier trees (campsite named after them) and a decent shower soon perked me up!

the plan for our one whole day was to walk along the canal in the direction of carcassonne. sandwiches were purchased and an ‘ecluse’ identified as a picnic spot. the sky was blue, the sun was hot but it was sad to see so many trees that had been cut down due to the desease affecting them.

many cyclists came by, in groups and in couples. some asked how far it was on to trebes as they had started from carcassonne and were feeling the heat! thankfully for us the trees began to appear and give some welcome shade.

so an easy flat walk and so lovely to feel the sun on our backs after so many soggy weeks. it was almost midday as we arrived at the lock and we were amused to see the lock keeper closed it for lunch. we took bets on how many boats would arrive just as he wanted to leave.

sure enough, after one went trebes-wards, two turned up from the opposite direction! 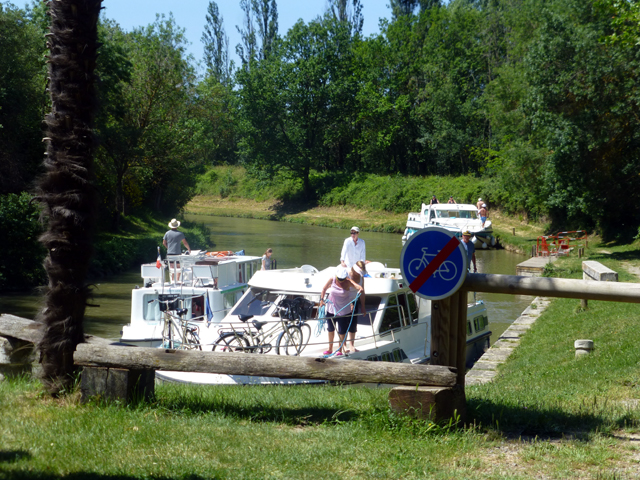 all this kept us amused as we ate our lunch plus giving us several photo opportunities. once the last boat was through the lock keeper roared off on his motorbike which seemed a little out of sync with the slow pace of boats and bikes we had witnessed all morning.

then a slow wander back, taking in the wild life – herons -that took off from the water as we approached and then settled further along only to repeat the whole pantomime as we appeared again. back to the campsite to snooze until searching for supper at one of the popular canalside restaurants in town.

we had eaten here before and it is probably the only attraction of trebes, a rather plain town when all is said and done! we had prebooked so got a canalside table with view of the swans and late mooring boats. 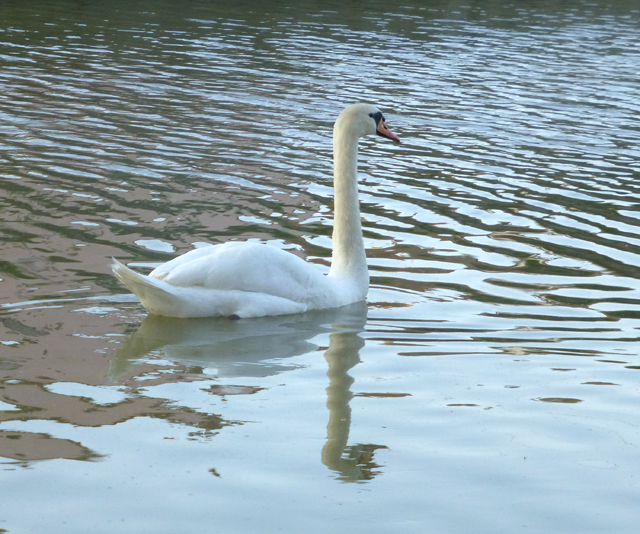 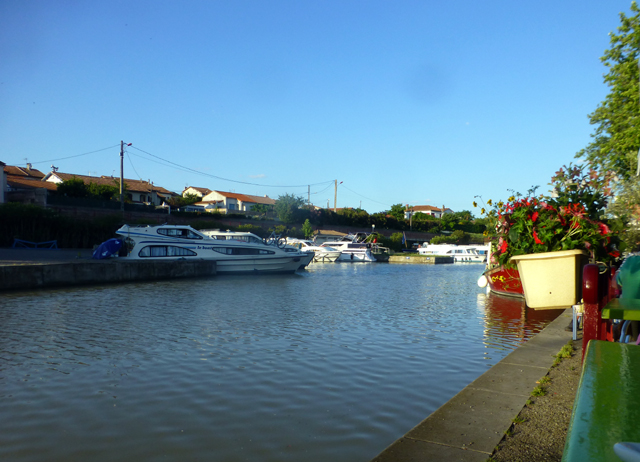 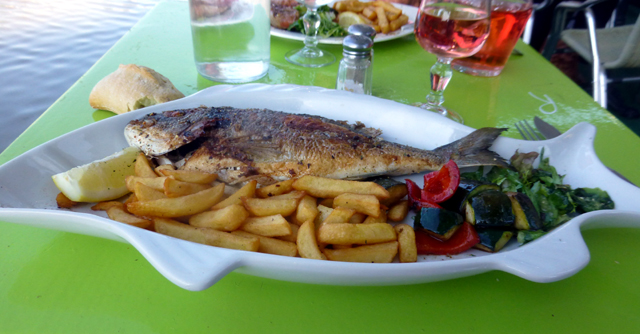 back to the tent where we decided the double mattress was an improvement on the folding beds but a poor use of space so back to the drawing board on that one. once the neighbours had shut up it was the turn of the noisily mating frogs on the riverbank and the nighingales in the trees to fill the night with sound!

packing up in the morning we found a toad beneath the bedroom groundsheet. he reluctantly allowed me to chivvy him under the hedge where he wouldn’t dry out. 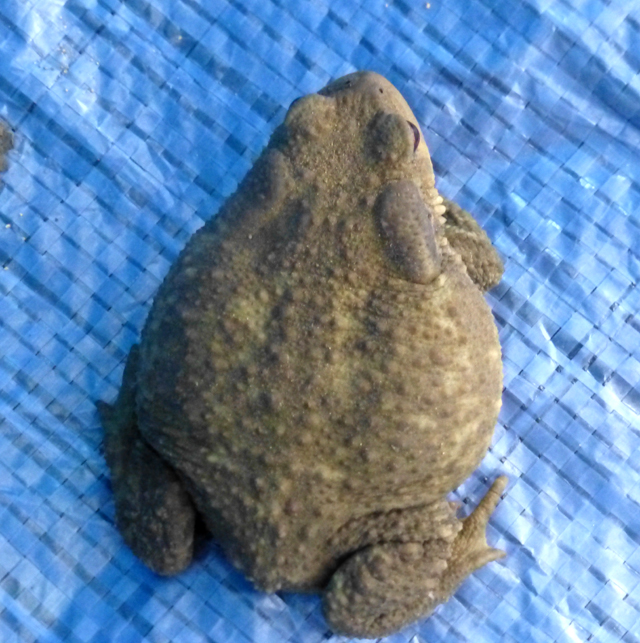 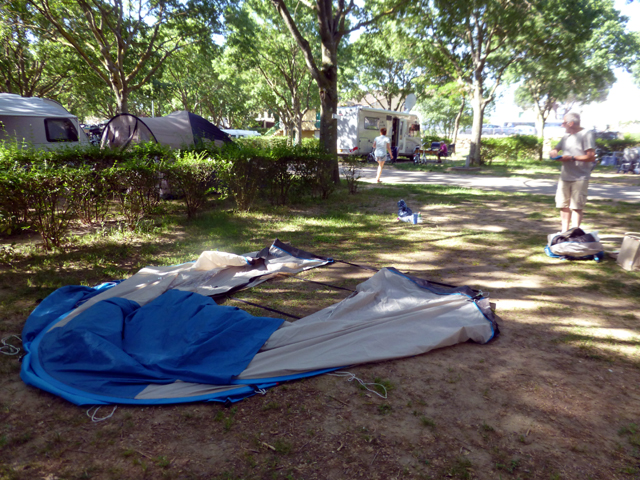 so a lovely interlude but not a restful campsite. too near the motorway between toulouse and the med.