Posted on March 1, 2015 by lynnefrancophile

comme d’hab the hotel wifi was available and free but not strong enough to upload posts and photos. so frustrating to be able to read stuff but not always reply.  if the weather had been better we wouldn’t have spent so much time trying to get online but there was a limit to how many coffees we could drink and how much time we wanted to spend getting wet! 🙂 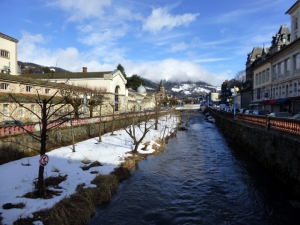 la bourboule was snowy when we got there (good!) and seemed a pleasant town with lots of restaurants and bars (good again!). the hotel aviation was handy for the town centre and the room was small but adequate with a separate loo from the bathroom which we prefer. on the third floor we had a good view of the town and its surrounding hills ….and the prevailing weather!

we spent our first few hours there finding the tourist office and a shop that sold maps. we were advised by the TO lady that chains would be advisable for going up to la stele, the espace nordique i had identified before booking, as having a clutch of boucles of variable length within our capabilities!

heading out for our first evening meal we went into the bistrot cyrano which, according to my online research, looked a lively place to eat. it was and we were met by a welcoming young chap who said we should think about booking in holiday season but still found us a table for two tucked into a corner. lou opted for potee d’auvergne and i chose truffade. the portions were huge and despite our good intentions we went for a cafe gourmand to finish on… 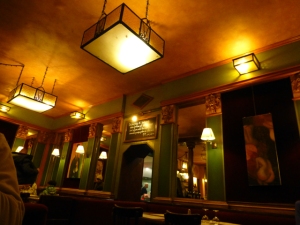 i loved the smoky 30s decor and was amused to read on trip advisor that a french reviewer said it reminded him of an english pub….must have been the gloom! 🙂

tuesday, lou’s 72nd birthday (how did we get this old?) we had breakfast in the rather sober dining room, filling our faces with fresh crusty bread, butter and jam, and then went off to find a sandwich at the baker i had spotted the night before. f reshly made to order we had a few minutes to waste around town so i bought a paper and cards.  so the following fight with the snow chains made us even later for the slopes. needless to say we weren’t wasting any good weather as the sun was hiding behind the clouds all the way up to la stele.

we passed someone struggling with his chains where the road became snowier. lou was very glad he had had a garage floor, albiet grubby, rather than wet snow to kneel on for the job!

at la stele the parking was already busy but some cars were leaving so we found a place and clambered into our gear. a light snow was falling but a weak sun was trying to break through. a good sign we felt. wrong!  after paying our dues at the guichet we followed the signs for the raquettes. as it was our first foray since last february in the jura we chose a short boucle.  it was very pleasant to be walking again and the sun splashed across our path now and again. 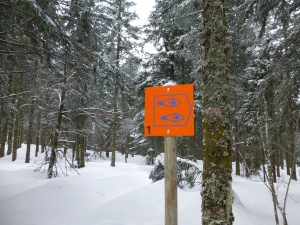 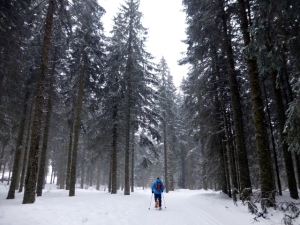 we hesitated where a longer boucle forked off to the left. but looking at the plan it was clear that despite being a reasonable length it was going to climb uphill a fair bit so we carried on as we were. a wise move as it turned out.  the forest was lovely and the snow frozen to the branches very picturesque…but the snow began to fall in earnest and we got wetter and wetter. 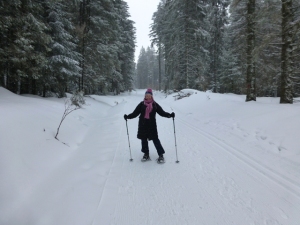 the going was slightly uphill and we both began to puff. i had read that it takes a while for your body to adjust to being higher and, maybe, that’s what was happening or it was an age thing. how demoralising! anyway, we were glad to be on a shorter walk and headed straight for the bar/restaurant when we got back to base. a huge wood burner in the middle of the room and hot soup on the menu which came with croutons and cheese, i has assumed some cheese ‘rape’ on top of the soup but it was three

after warming up we made room for other wet and cold walkers and returned to the car to strip off the wet togs and try our sandwiches. more cars were arriving but the weather wasn’t getting any better so we decided to go off and do a bit of exploring while we still had the chains on.

we found la tour d’auvergne, a very forlorn village whose claim to fame seemed to be a virgin on a tall tower on a nearby hilltop. then chastriex, equally sad but made for a good photo! (see left)

after looping back round to la stele and catching odd moments of sunlit views we came to the fork for la bourboule but chose to carry on to la mont dore out of curiosity.  when we finally came to it the town looked pretty grim from above and we wound down a narrow road into town with cars squeezing past us due to nose to tail parking on each side of the road. we wondered why until, later, i discovered from the map there is a funicular at that side of town which went to another espace nordique, le capucin. turning round as we had no desire to join the parking scrum, we drove back the way we had come and went to see what le capucin ski place was like.  no space in the car park so we turned for ‘home’.

once more, a perusal of the map helped me identify la banne d’ordache which we saw bathed in sunshine as we drove back. this turned out to be a clue to the origin of the name of our hotel. back in the 30s there had been a glider centre on la banne and the hotel had welcomed the aviators who came ‘from all over the world’ to fly there. it closed in the late 30s but is still a centre for remote control model ‘planes.

back at the hotel the weather really closed in and the hills disappeared from view. we lazed around in our room, reading the papers and playing online. i was even too idle to go and have a swim in the hotel pool! wrapping up well, we took ourselves off into town and, after a false start or, rather, snub, at the logis le charlet, we went into the hotel de la poste et europe where we had a simple but well cooked meal and good bottle of local rose wine to celebrate the old boy’s birthday! 🙂 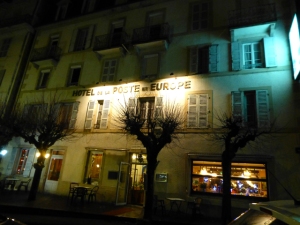