Posted on November 2, 2014 by lynnefrancophile

a lovely jaunt. we left at ten o’clock as planned and drove through sunny countryside, stopping around eleven thirty for coffee in st andre de najac. a stone house with a pretty terrace outside and a bar that reminded us of an english pub.  dotted about the place were flyers for a fish and chip night the following evening. clearly an english affair! 🙂 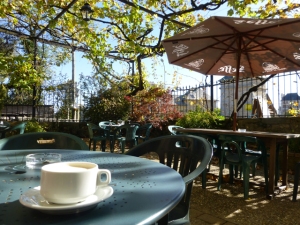 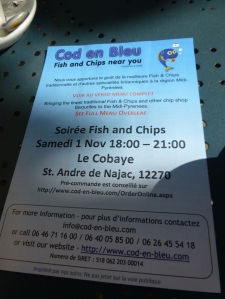 moving on we looked for a likely place to eat our sarnie lunch and plumped for a lane just before laguepie leading to an aire which we didn’t find but which led us down to a campsite on the river viaur.

passing cordes sur ciel and surprised by the lack of traffic on the road we soon arrived in albi and easily found the car park – google earth plus its photos is really helpful! a short walk across the place du vigan to our hotel and our very green room overlooking a side alley.  next time overlooking the place, lou said.  ooh, goodie, there will be a next time?

the lady on the desk had given us a map of the ‘vieux ville’ and we strolled to the palais de la berbie (the toulouse lautrec museum) via the covered marketplace.

(it is not lopsided, that is the effect of my wide angle lens!) at the palais there was a very jolly chappie on the desk who asked everyone for their ‘code postal’. on hearing my 46 he joked about the strange accent of les 46s. oui, i replied, tres unique! the art work was as stunning as i remembered it from ages ago but the palais has undergone a lot of expert refurbishment and uncovered some stunning architectural features. i was particularly taken by the 13th century tiled and painted floor in the grand salle and a painted corridor ceiling discovered under layers and layers of chaux. amazing the lime in it didn’t ruin the colours! no photos allowed but i found a post card of the ceiling.

a pause for tea and pie (no patisseries on offer!) with a view of the cathedral draped

the weather was still bright and sunny, how lucky was that?  the cathedral looms above everything and i still thought it looked like an enormous grain silo!  we decided to go inside as lou didn’t last time we were there and i was keen to see the marvellous painted ceilings and walls, becoming a recurring theme? 🙂  our day pass tickets we had bought from the tourist office next door to the palais entitled us to visit the choir but half of it was closed for refurbishment.  this happens to us a lot on our promenades!  i’m sure gav and i didn’t pay last time we visited but it was only a few euros for anyone even without the passes. we strolled and took photos (no flash allowed) and then sat outside for a bit before heading back to the hotel.  who knows how long this wonderful weather will last? 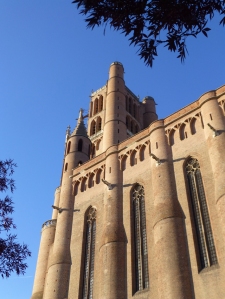 walking back i dived up some steps to a cloister (i love to read any tourist signs on walls and had already learnt from one about the ‘pastel’ trade that made albi rich in previous centuries. ‘pastel’ turned out to be woad! ).  the cloister was the cloister of saint salvi, a church that still survives but only a part of the cloister is left after the destruction following the revolution. 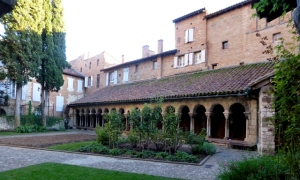 back at base i brewed up a redbush tea and we pondered where to eat later.  the wifi was weak and i gave up trying to update this blog!  the lovely lady on the desk had several places that might suit but each turned out to be closed for toussant.  finally she remembered a little bistro across the square called le petit boucher which sounded just right.  we decided to check it out but on the way i had to pop into eurodif, a shop filled with christmas goodies so, despite my protestations about chrimbo coming too early,  i bought a festive heart to swing from a door handle!

the bistro was fine but le patron asked me to come back at seven thirty so we went back to the square and took aperos outside a big bar facing down the ‘place’.  the tables were dressed with candles in pumpkins and the waiters were halloween face painted.  groups of infant witches and ghosts accompanied by mums came by to trick or treat and were offered a basket of sweets from which to choose .  the fountains played and the people of albi passed by or sat down to share chat and drinks.  i reflected that town life can have its compensations in a pleasant place such as albi.

then we headed to the bistro for a sumptuous meal.  entrees, then a huge jarret de porc – each – followed by the best creme brulee i have ever tasted.  note to self, check what exactly the chef means by jarret du porc, in this case it weighed in at over a kilo each according to the waitress!  we slept well!

we slept well enough in our green room with the squeaky floor (not old floorboards, rather laminate laid on top) and went down for breakfast.  i had read on one review not to bother going out to the brasserie on the ground floor but enjoy the copious hotel offering.  so we did despite still feeling a tad bloated from the porc of the night before!

checking out we discovered that we had been given a third off the car parking price but didn’t need to leave until after lunch so a bit more time in a lovely town and the sun was still shining.   it being a jour ferie/bank holiday a lot of shops were shut but the tights shop i has spotted the day before was open and i bought a couple of lovely pairs.  i had first seen this chain in sienna in italy a few years back and never found them in france…result.   as we strolled down for one last look at the cathedral we spotted a market all around the covered one.  so photo opportunities as well as purchasing ones!

however, we had two photo exhibitions we wanted to see in toulouse, our next stop, so we rejoined the car under the place and headed for ‘toutes directions’.  an easy drive to toulouse down a road that is mostly a new motorway so we were soon in familiar territory and, happily, found an empty space in the car park right next door to the edf espace bazacle on the bank of the garonne and nothing to pay due it being that bank holiday.

i had seen the edf expo featured in the depeche, a mine of information, which is why it was added at the last minute to our trip. plus, it had the added advantage of being open from eleven o’clock and on through lunchtime. the other place we were going to only ever opens at two in the afternoon.  what is more, it was free!

it is not clear to us if the bazacle is still a functioning hydro-electricity plant or not. there is a turbine hall with moving turbines but due to maintenance work we couldn’t go in…the promenading gremlins strike again!  the views inside and out are pretty spectacular if you like an industrial context.

we crossed a platform with various bits of industrial kit placed like sculptures and went into the exhibition space. the upper floors were devoted to portraits from china, a country with whom edf says it has strong links. the staging of the expo was jolly and many of the faces unforgettable.

down another level we came to the story of edf and its connection with water, very interesting if i had been looking for a school visit but a bit finger waving about the environment. i wondered if they do all they say they do!  but the information about fish in the garonne was good and, later, down yet again, we saw into the fish pass that noisily churns the water below a sunny terrace overlooking the garonne and the far bank.  in this almost subterranean gallery there was an exhibition devoted to the monuments to the dead of the first world war around toulouse with photographs of certain memorial features. was it only me who found it a bit macabre to put this so far down in the earth?

coming up for air we asked the chap on the desk for the nearest cafe for lunch. he sent us off down the riverbank towards the place saint pierre where, indeed, we found places to eat and were able to eat lightly! 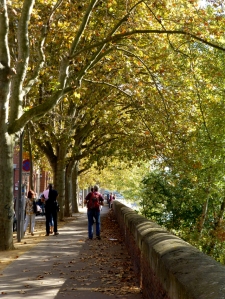 we decided to cross the river via pont st pierrre to find the chateau d’eau, our next rendezvous, and circle back over the pont neuf to the car. so we did.

a pleasant walk over the river, making sure to sidestep the dog poo, and then along the back streets to the chateau d’eau, another old waterworks. i love galleries in old industrial sites.

the expo we were hoping to see was of doisneau and dieuzade, two photographers and friends.  the idea was to show companion pieces by each photographer.  i have to admit to being able to spot doisneau’s work from each group, only making a mistake once.  hard to say how i did it, just that, for me, doisneau has something extra in his work, a comment enshrined in the image somehow and not always a happy one.

whilst there we saw a poster advertising an evening dedicated to vivian maier with a film show.  would it be alan yentob’s we wondered. 🙂

all gawped out, we wandered back over the pont neuf and along the quai de la daurade. the toulousains were out in force in the sunshine. people strolled, took cruises on river boats, lounged on the grass, sat along the water’s edge, played instruments….and smoked a lot of weed if the smell was anything to go by! 🙂 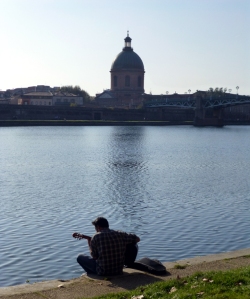 back at the car we set the gps to find our way out of the one way system and to the autoroute.  on the way home i spotted a multicoloured hot air balloon rsing slowly into the late afternoon sky….a last summery sight.