Posted on September 20, 2014 by lynnefrancophile

No, I wasn’t all sight see-ed/sight saw-ed out. nimes is lovely. A small town where every alley and street you wander down invariably brings you back to where you started from. Our hotel was very welcoming despite us arriving too early for normal booking in. a car park place was allocated and a room ready. A map was provided and a recommendation for lunch with a discount if we showed our b and b bill. 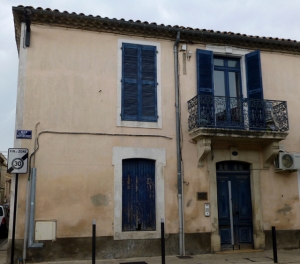 A straight walk down the rue de la republique (isn’t it always?) and we came to les arenes. Dirtier than the one in arles but possibly more impressive at first sight as we saw it across a wide square, empty except for a sculpture of a toreador.

As one of the three main sites of nimes we had to visit it but spurned the audio guide. This meant we were able to follow the arrows for the ‘visite’ without becoming one of the many people cluttering up the place, handset glued to one ear! I was sad to see less stone seating than in arles but then read a helpful panel, one of many, that explained that in the middle ages the town of nimes moved wholesale into the arena so forming themselves into a fortified town without the hassle of building walls. 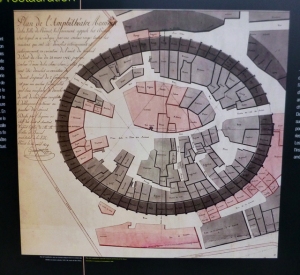 So the stone must have been recycled! We walked up and down and round and round but were not allowed to stand on the top level which lou was keen to do in the interests of a good photo, comme d’hab. 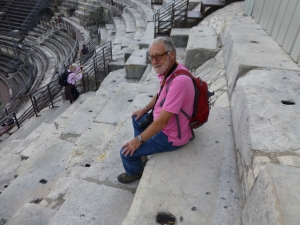 From there we had coffee and pondered the next move. Then the rain started. We were equipped with raincoats and wearing jeans, a precaution many tourists hadn’t taken. Perhaps they are not avid readers of the meteo as lou is! We looked for the place du marche as that was where the recommended restaurant was located. The menu looked good, the rain continued to fall and so we opted for an early and long lunch, last day and all that! 🙂

across from where we sat was this fountain with a broken column and a crocodile….why?(After the Egyptian campaign, some of the soldiers of Augustus moved to Nimes. Their victory was symbolized by a crocodile chained to a palm tree, then a recovery representation on coins minted in Nimes and become much later (in François 1er) arms and the emblem of the city. In the 1980s, the combination palm / crocodile is reinterpreted by Philippe Starck. Present everywhere in the city, the illustration of ancient origin does not fail to pique the curiosity of visitors …) this quote is a translation, (not mine!) of why there are so many crocodiles in nimes! 🙂

suitably replete and with the rain stopped temporarily we headed off into the alleys to find the maison carre, rather an odd name for a roman temple, another of THE sites. 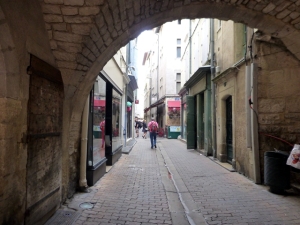 We didn’t find it but came out eventually onto place st antonin.

I had been diving down side alleys to read specially composed panels (french, english and spanish) on specific old buildings.

St antonin is the beginning of the quai de la fontaine. A pretty canal with plane trees on either side which we strolled along towards the jardin de la fontaine.

Another of THE three sites with the t­emple of diana on one side and the tour magne on the hill above. We looked in the temple and quacked at the ducks in the elaborate stone pond swimming with gold fish. 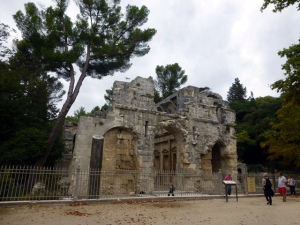 The clouds were threatening and black so we decided against climbing the hill to the tour. Another day, another visit!

walking back towards the centre of town we managed to find the carre d’art and the maison carre. One is a modern art gallery and the other a roman temple, facing each other across a square at the top of boulevard victor hugo.

We noticed lots of police and security around as well as crash barriers and lots of hazard tape. Clearly there was going to be a bit of a do happening later on! Bars and food stalls were going up all the way down the road. 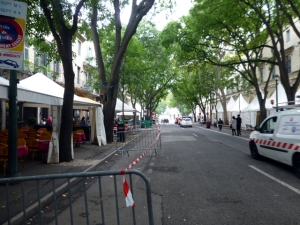 We knew there was a cours camarguaise happening in les arenes that evening which we fancied seeing (as no bulls would be getting hurt). The ticket office asked us to go back at five o’clock as a decision about whether it would be taking place would be made then in light of the storm warning in force. I bought a local paper and discovered we had arrived in nimes at the start of the feria des vendanges, four days of bullfights, music and boozing as far as we could make out!

Not long before six we walked back to the ticket office but found notices saying the cours had been cancelled. A ‘fanfare’ was playing in front of the arenes but no sooner had I sat down to listen but the rain started and we quickly moved over to the shelter of the nearby building. 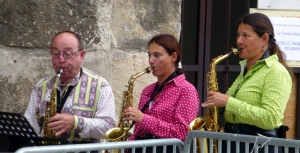 It turned out we were standing in front of the local radio station and lou noticed a sign on the door advertising a free photo exhibition so we spent a few minutes looking at the work of one of the radio journalists. A personal collection of photos of nimes life. Back outside the rain was still falling and the evening became something of a damp squib.

The newspaper’s list of events didn’t appear to be happening and after a couple of drinks in different bars and a sandwich from one of the many stalls doing little business we called it a night. We walked home passing the police car that had been patrolling the virtually empty streets and the music playing to empty buvettes. I hope the next four days of feria are more successful!