floga, not flog it

Posted on September 21, 2015 by lynnefrancophile

Saturday was the long drive northwards. We knew the part after tirana was bad but were more concerned about the first bit back over the magnificent but time consuming mountains beside the sea.

Google and the gps revealed a route that struck inland before turning left for gjirokaster and tepelene. So that’s the way we went! Eric was horrified we were leaving so early. Nine o’clock? Early? Refusing his kind offers of coffee and/or water for the journey, we shook hands and took our leave. Earlier, he had told me that he is greek and goes off to work in athens for three months over the winter ‘for myself’. Next year he is going to texas and, maybe, sweden.

The road was faster and straighter than the one further west. We should have used tomtom rather than lynnelynne said lou but did concede we had seen some fabulous scenery via lynnelynne’s route! For lunch we stopped at one of the ubiquituous gas stations and had very good forcaccia. At durres we found the road to shkoder smoothly even if the first bridge wasn’t! We began to recognise things as we joined the link road from tirana. At shkoder we found the city centre but were frustrated to find the information kiosk closed. A call to the hotel floga to discover we were two crossroads away. We drove over the two crossroads and began to leave the posher bit behind us. But there was the sign as directed and down a right fork and right again into a scruffy street and there was hotel floga. 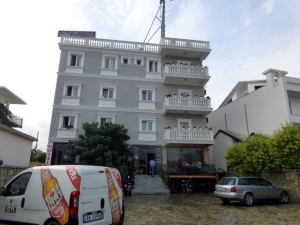 Some squeezing into the car park out front and then shown to our room by the owner and her english speaking nephew.

Very loud music issued from the downstairs bar and then a whole wedding party swept out for photos. A good omen? Or going to be kept awake all night? 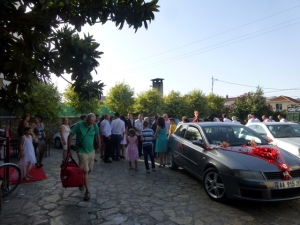 The room was ok with an enormous bath in the ensuite. We had no intention of sightseeing after the long drive so snoozed until dinner time. The nephew had said we could eat downstairs and the wedding celebration finished by five o’clock. When we arrived in the ‘restaurant’ it was a big echoing bar with some men sitting about watching the football on a wide screen tv in the wall. 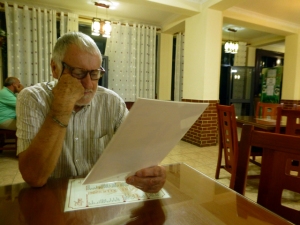 We had changed and felt a bit out of place! 🙂 the lady owner bustled about putting a cloth on our table and explaining as best she could what things were. She and i had a giggle over the farmyard noises we made to identify the ‘mishi’. The food was basic with no veg in sight but the chips were good and came with a dish of grated cheese to sprinkle over them. Did shkoder invent cheesy chips? 🙂

We bought two glasses of wine that turned out to be quite good. Her nephew turned up to make sure everything was ok. We had a chat and discovered he had just graduated from six years of medical training in florence. He was off to naples in november for five years of specialisation. His body language was suggesting ‘no way’ when i asked if he would come back to albania afterwards. We said it was sad if the country was losing all its young people and he replied that there had been a thousand in greece before the crisis there. Now it was about 700, 000 and 500,000 in italy. Hard for a country to develop if the younger gogetters get out. 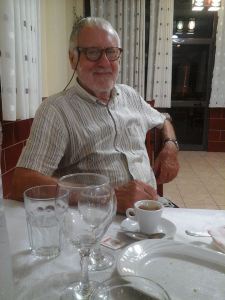 To finish the meal lou decided a raki was in order on our last night in albania. A large one arrived…i have a photo of lou with a big soppy grin on his face, a raki induced one!  🙂

2 Responses to floga, not flog it