Posted on September 18, 2015 by lynnefrancophile

I was incredibly tired yesterday due to not sleeping much at all. I think the prospect of going out on the albanian roads again was playing on my mind. Suffice to say i was not at my sunniest and when we got lost around durres i was ready to throw in the proverbial towel. This was a bit unfair on the albanians we had met so far who had treated us with great courtesy (unless they were behind a wheel!). The girl on reception on sunday night, the waiter in the little restaurant and the chap who had parked our car and then brought it back to us. He helped explain the road we ought to take to berat and which towns to look out for. Lou offered to tip him for his help with the car and bags but he refused and said it was his job. Then we were embarrassed that we may have offended him but he said no and wished us a good time in berat. First we had to get out of tirana and that is no easy matter due to the almost complete lack of road signs.

Turning right ‘at the crossroads’ as directed by our hotel guy we found ourselves driving into the market area we had explored the day before. Cars, vans, bikes, people and a road bisected by trench like potholes. The car dipped and swayed like a ship at sea. I waited for something important to go crunch underneath. Eventually, by following our noses we found a sign for durres and a road that looked like a proper motorway. 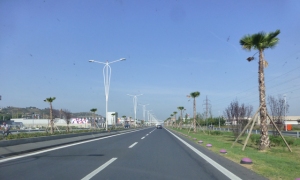 Posh lights and intermittant fancy white footbridges. 90km limit but we couldn’t relax. For example, later that day i saw a man lifting his bicycle over the crash barrier into the fast lane so he could cross the road.

We saw a lot more of durres that either of us ever want to see again. The gps took us to the edge of town and then went to sleep for the duration. Suffice to say we saw the oil terminal and jetties against a background of blue sea and sky but no sign of the onward motorway to lushnje. Only when we gave up and took the last option, the motorway back to tirane, did we find the turning a kilometer up the road! This motorway wasn’t as posh but was lined with huge blocks of flats.

According to my guide book durres is a popular beach resort south of the city. Once on this road our spirits rose and we eventually stopped for coffee at one of the posher looking gas stations. Very colourful and very loud music which the boy behind the bar turned down as we walked in. A lot of bars and restaurants have flat screen tvs on the wall showing music videos or the news but always with the music turned up high.

My cappucino was wonderful, topped with chantilly in the french style and the coffee itself flavoured with cinnamon. We pressed on feeling much better. The signs began to get better and berat began to feature.

Our hotel guy had said there was a new road but these things are all relative. But it was a new road, still being finished in parts but easy to follow.

We still had to be careful of the minibuses that stopped suddenly for passengers but we were getting resigned to them by now. Berat was much bigger and busier than i had imagined from my guide book but easy to navigate. We parked by the river and walked up the steep cobbled street to the hotel.

I was given a key to 204 but by the time lou got back with the car ( and did some brilliant reversing up the slippery marble cobbles) a younger chap had arrived plus a girl who spoke good english. We are giving you a choice of room she announced and showed us a much bigger room with a view over the rooftops to the river.

Lovely. We dumped the bags and went off to the restaurant she recommended across the river.

The traditional arrival beer for lou and a spritzer for me, once i had educated the waiter as to what a spritzer was!  🙂